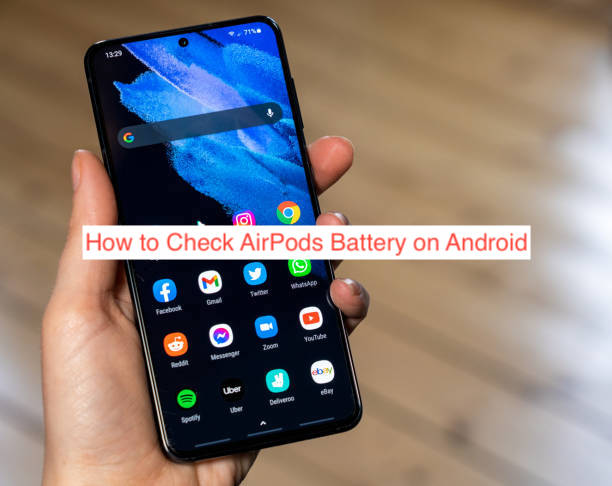 It’s no news at this point that AirPods are made for iPhones first, with most of the amazing functionality exclusive to devices running iOS, iPadOS, or macOS. That doesn’t seem fair to Android users trying to get a feel of the AirPods experience by using it, regardless of their dedication to the Android operating system.

If you’re one of the few people that buy Apple’s AirPods despite having an Android smartphone, you’ll need a guide to get the most out of it. Since there aren’t enough official guides from Apple, I’ll assume the role of keeping you up to date with tips on how to use the device with your phone.

Can You Check AirPods Battery with Android?

When you set up your AirPods with an iPhone, you’ll notice that you can see the battery percentage of the device, as well as that of its carrying case. For Android smartphones, however, that doesn’t happen by default.

While Android smartphones will show you the battery percentage of select earbuds like the Samsung Galaxy Buds Pro, Apple didn’t find it necessary to make their earbuds work seamlessly with Android. If you fancy the AirPods aesthetic but not Apple’s iPhone, you may have to find workarounds.

Fortunately, some workarounds simplify the process of checking your AirPods battery level with your Android smartphone. The most common one is using a battery monitoring app from the Play Store. Since they’re relatively so many of them, you shouldn’t have to search for long before finding one that works.

Some apps let you check the battery life of the earbuds and the charging case. If you don’t mind having to go through some extra trouble while doing that, you can use your AirPods with an Android device without any problems.

How to Check AirPods Battery on Android

When you buy a pair of AirPods to use with your Android smartphone, you should accompany that with a collection of apps that make it easy to use the device with your Android phone. There are several AirPods apps, but in this article, we’ll be talking about those that offer the battery checking feature.

Most of the apps in this collection are free, with some having premium versions that let you unlock extra functionality. For example, AirBattery, a popular ad-supported AirPods battery level checker will get rid of the ads once you start paying for the pro version.

The features of each app differ based on the app. While some let you see the battery percentage for the AirPods alone, certain apps will also show you how much battery is left on the charging case, which is a bit tasking to implement on Android, given that the case doesn’t have Bluetooth itself.

With that said, here are some of the best apps that let you check AirPods battery level on your Android smartphone for free.

The app has a pro and a free version; the free version is supported with ads while the ads disappear when you pay for the pro version. If you hate to see intrusive ads as soon as you enable your Wi-Fi connection, you may want to pay the tiny app.

Besides AirPods, AirBattery also supports headphones from Beats by Dre, BeatsX, and a host of other headphones listed to be supported by the app officially.

Check it out here.

If you’re looking to get some extra functionality in addition to the ability to check the battery level for your AirPods, you may want to check out this app. The app has an extremely intuitive interface that gives you all the necessary controls, making you forget you’re using unsupported headphones.

You can use PodControl to modify what happens when you tap on the AirPods. Unlike on iPhones, you can’t assign different tasks to each ear; double taps and quad taps will work regardless of which of the AirPods you tap.

Another reason why you may want to choose Pods control over AirBattery is that there’s no paid version. Since the free version is the ultimate version, you can be certain you’re getting the absolute best of what the developer has to offer.

READ MORE: How To Connect Fake AirPods To Android

While we can agree that AirPods shouldn’t work as effectively on Android phones as they do with iPhones, it shouldn’t come down to the battery percentage. Checking how much juice is left on your device is a very basic feature, and you shouldn’t need an iPhone for that.

If you’re finding it difficult to check your AirPods battery level on an Android smartphone, here’s the best guide for you. Here, I outline the steps necessary for checking AirPods battery on Android and the apps that can help you with that purpose.

1 thought on “How to Check AirPods Battery on Android”