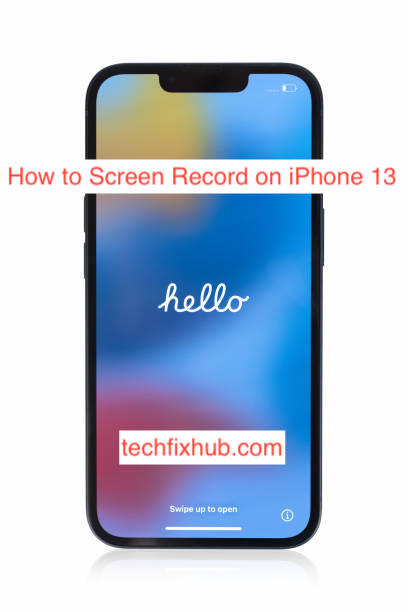 Taking a real-time video recording of happenings on your iPhone’s screen is one of the newer features that has gained steam over the years. While people didn’t see its appeal decades ago, it has now grown into one of the most used features on new iPhones.

However, the default screen recording feature on the iPhone 13 may not be as intuitive as you want. In that case, there are alternatives from the App Store that you may want to explore, even if that’s not what I or anyone would recommend in any scenario.

In this article, I’ll show you all you ever need to do to create screen recordings on your iPhone 13. Also, you’ll learn about some alternative screen recording apps that work just as well as the default if you’re having problems with Apple.

What Does Screen Recording Mean on iPhone 13?

You must have watched a video where someone showed the walkthrough of steps to achieve a certain objective on their iPhone. No, they didn’t use a special high-grade camera to capture their screen, they only used a capable screen recording app to take a sort of video screenshot.

The easiest way to describe a video recording is a video screenshot, even if that isn’t grammatically accurate. Screen recording records whatever happens on your device’s screen and plays it back as a video file, making it a feature that many users often.

If you’re wondering why it’s so popular among iPhone users, the answer is simple. Apps like Instagram and YouTube don’t let you download videos by default. The screen recording option is a way to bypass that annoying restriction without having to use a bunch of dangerous sites across the internet.

Screen recording is possible on any iPhone with iOS 11 or higher, but it’s even more robust on some of the most recent iPhones. If you use an iPhone 13, you’re getting a vast majority of the screen recording apps out of the box without installing any updates.

If you’d love to learn more about that, I’m also willing to give out the information. In the following section, I’ll show you how to start a screen recording on your iPhone 13 and some of the reasons why the screen recording may not work properly.

How to Screen Record on iPhone 13

Thankfully, getting the button to show up in your control center only takes a couple of seconds at most. Since it’s an integral part of the process, it will be the first step in the process. Without further ado, here is how to screen record on the iPhone 13.

When you swipe down from the top right corner of your screen, you should see a bunch of controls and buttons that let you modify crucial settings on your iPhone quickly. Apple refers to this feature as the control center, and it’s almost as old as the iPhone itself, with big visual overhauls over the years.

To enable the dedicated screen recording button, head right into the Settings app and click on the Control Center option from the menu. That should bring you to a page with all of your Control Center icons denoted by their names and arranged in a list.

When you scroll down a bit, you should see a “More Controls” list that usually contains more entries. Scroll through this list and tap on the green + icon beside the “Screen Recording” option to add it to your Control Center.

To make the screen recording button more reachable, you may want to drag it higher up, a move that makes it go higher on the icons in your Control Center.

If the app you’re using at the moment plays fine with screen recording, you can always swipe down from the top right corner of your iPhone’s display to show up in the Control Center. Then, tap on the screen recording button to start the recording.

The screen recording button looks like a circle inside of another circle. Once you tap on it from Control Center, you’ll see a little menu with an option to let you include audio in the recording. The only other option lets you start the recording.

When you start the recording, the clock in the top left corner of the screen should turn red, which is the indication that you’re recording your screen. You can stop the recording by tapping the red clock icon and then selecting Stop from the pop-up menu.

If you’re trying to illustrate a process on an iPhone, there’s no better way to go about it than using a screen recording. To make the process a lot easier, Apple includes a screen recording feature with every iPhone that you can use to record your screen.

This article is the only guide you’ll ever need about recording your screen on an iPhone 13. If you follow the steps in the article properly, you shouldn’t have any problems with recording your iPhone’s screen.

1 thought on “How to Screen Record on iPhone 13: Easy Guide”