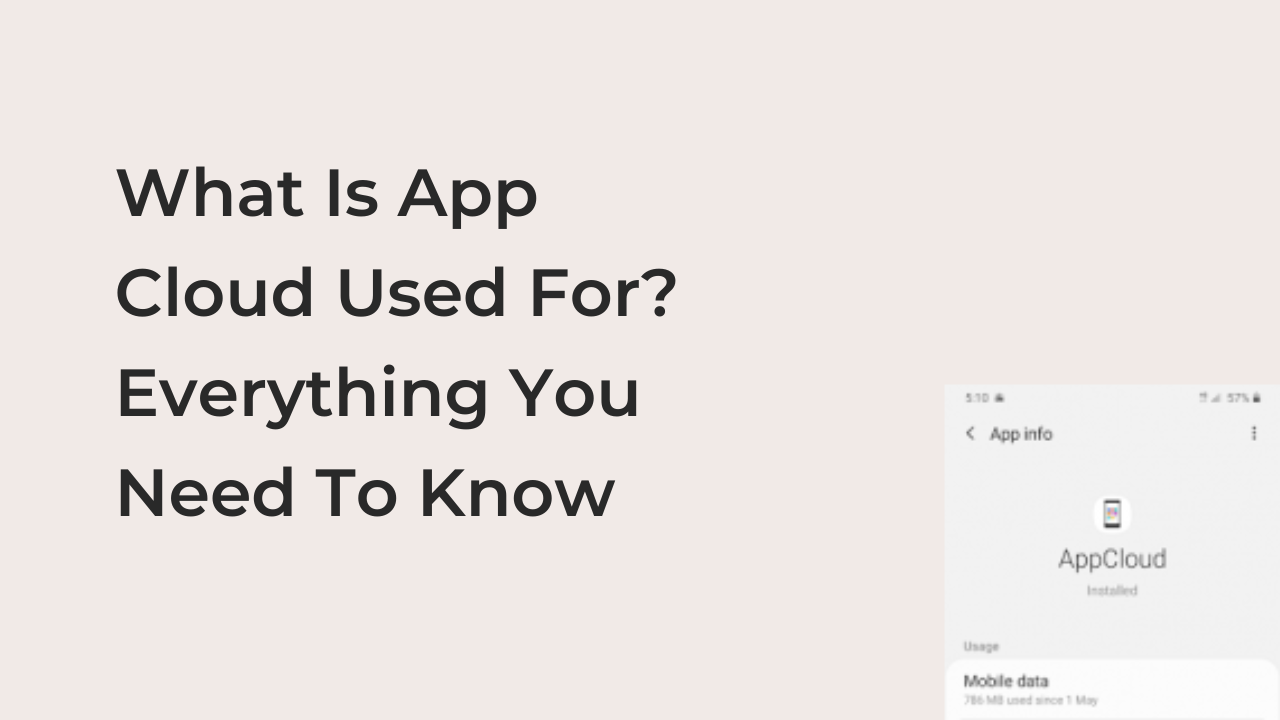 Android users can install apps from the Google Play Store or Sideload APKs downloaded from the internet. However, only a few Android smartphone users are aware of App Cloud, which allows users to run applications with the bulk of their components in the cloud.

If you accidentally came across the term somewhere on your phone or the internet, learn what App Cloud means. With the advancements in cloud computing in recent years, learning about a term like App Cloud has become even more important.

In this article, you’ll learn what App Cloud means and how it originated. Also, you’ll learn the practical uses of this innovation and how to use it to explore new possibilities on your Android smartphone.

What Is App Cloud on Android?

App Cloud is the name of a platform that lets you create a cloud-based IT governance framework that lets you offer functionality to an app that’s run through a browser or native of Android using APIs. If you’re a regular smartphone user, it’s highly unlikely that you’ll want to learn more than this.

If you’re searching for App Cloud, it’s likely because you saw the AppCloud app sending notifications on your Samsung smartphone. They bundled this app with certain Samsung smartphones to help push OTA updates to pre-installed apps on the smartphone.

Last, you may also refer to cloud applications, which aren’t a very new trend. Cloud applications refer to an application with the bulk of the processing on the storage on the internet, with only the front end running in an app or on a web browser on your end.

A cloud application is so named because the computers that run these programs exist somewhere that the end-user rarely cares about, hence called the cloud. These third-party computers do all the processing and storage for the app, while your computer only downloads and displays the frontend in real-time.

Some of the most common cloud applications include Google Stadia, Google Docs, Office 365, and App Cloud itself. These apps all have most of their components in the cloud, and you only have to load the frontend to use them.

There are many reasons many companies are turning to cloud-based applications recently. However, it’s important to note that these advantages only exist because of the accessible and speedy internet connections that have become commonplace.

In the early days of the internet before the 4G or 5G internet, it was pretty impossible to maintain a cloud application. Most of these apps require a stable internet connection of multiple megabits per second, which is impossible to get on previous networks.

With that said, here are some of the primary advantages of cloud applications over native apps.

Most people don’t understand the cost-effective side of cloud-based applications until they develop cloud apps. However, by critically analyzing the offering of a typical cloud platform, you’ll understand why it’s a lot better than using alternatives.

If you’re setting up your custom infrastructure, you’ll have to buy computers with insane processing powers and hundreds of graphics cards. For a startup, this may run into millions of dollars, getting more expensive as you scale.

With a cloud app, however, you can buy just as much storage as you want with as much processing power as you need to keep your app running. You can also scale appropriately as you get more users without the need to upgrade any physical computers to keep your app up and running.

If you’re managing your app using your physical hardware, you’ll also have to handle the security aspect manually. This is a cumbersome process in which you may have to hire security professionals to keep everything running seamlessly.

With a cloud app, however, the entire structure should already be secure by design. Taking Google Cloud as an example, the cybersecurity experts at Google will help you manage all the apps on your device, automating your app’s security.

Decades ago, establishing an IT startup involves buying computers that handle storage and processing for the apps that you create, if you offer software as a service. Having to handle your servers yourself this way poses a lot of problems, with scalability being the easiest one to think of.

When more customers adopt your app, your initial servers may become insufficient for managing your business, requiring you to upgrade. However, upgrading in this sense requires replacing entire graphics cards, processors, and hard drives, which is a highly cumbersome process.

What if you can have others do that on your behalf? That’s what cloud companies like App Cloud, Microsoft, and Google are offering using their respective cloud services. With those, you can easily scale your business with a single click. No hard drive installation is needed!

How to Remove AppCloud Bloatware from Samsung

Difference between cloud applications and App Cloud, AppCloud is a bloatware app from Samsung that helps to prevent you from installing other bloatware. Occasionally, you may also receive ads from this app on your launcher and other parts of your Samsung smartphone.

While you can’t uninstall AppCloud, you can always disable it to prevent it from disrupting your device usage permanently.

To disable AppCloud, navigate to the Apps option in your device’s Settings and find the AppCloud app. The app should carry the Disable button, which you can select to permanently disable the app. Thereafter, stop receiving ads from the app all over your smartphone.

Trying to describe App Cloud can be pretty difficult, as there is so much disambiguation that it’s almost impossible to imagine what you intended. You may talk about App Cloud, a cloud platform, cloud applications, or even CloudApp, the bloatware app on Samsung.

Since it’s impossible to understand what you want to learn about, you can learn about them all here. From cloud applications to Samsung bloatware, this app includes everything you may want to know.