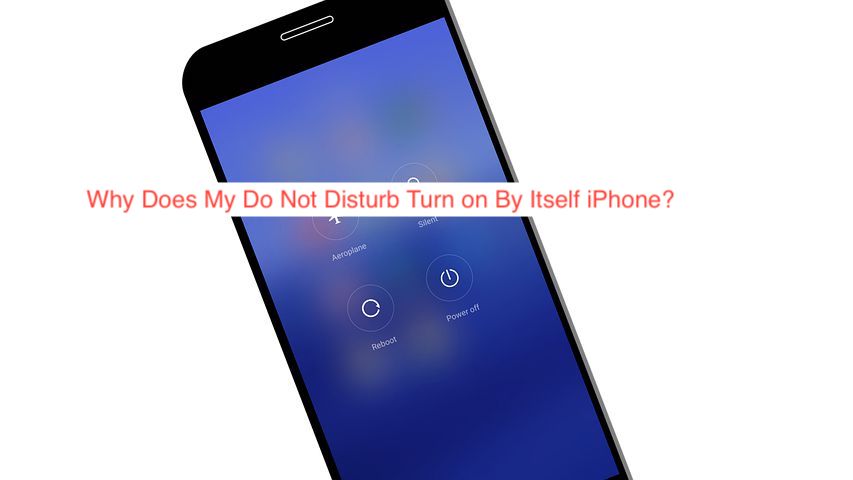 When your phone is on Do Not Disturb mode, calls won’t ring out and the regular notification for texts and SMS won’t sound. The feature is typically handy when you need some quiet since the rings and dings constitute one of the biggest disturbances to your daily life.

One thing you don’t want, however, is the feature turning on when you don’t want it. In some cases, Do Not Disturb will turn on by itself, causing you to miss important notifications, which is something you do not want to happen.

In this article, I’ll show you why Do Not Disturb keeps turning on by itself on your iPhone. Also, you’ll learn how to disable this activity to ensure you get all the necessary notifications. If you’ve missed events and notifications due to this error, here’s an ultimate guide.

Why Does My Do Not Disturb Turn on By Itself iPhone?

No, you’re not dreaming: your Do Not Disturb is turning on by itself. Also, no, the behavior is not a bug; there’s a legitimate reason why it keeps enabling itself on your iPhone. With that said, why does my do not disturb turn on by itself on iPhone?

There’s a feature on newer iPhones (and some Androids) that lets you schedule Do Not Disturb. You set a time when it automatically enables itself, and you can also set it to automatically disable at another set time. If you have this feature active, it may be the cause of the issue.

Also, newer versions of iOS have a bedtime that you can use to control when you go to bed. Since you don’t want calls and rings from text messages to disturb your sleep, you may want to keep your phone silent. Apple included a Do Not Disturb toggle under the bedtime option on your iPhone’s Clock app to ensure you can do that effortlessly.

If that toggle is set to be active, you should expect Do Not Disturb to turn on by itself when it’s your bedtime. Thankfully, you can always turn that off if that isn’t what you want, and I’ll show you how later in the article.

Another reason why the Do Not Disturb on your iPhone may appear to be turning on by itself if you’re almost constantly driving. While this isn’t the default behavior, you can activate a feature that automatically enables Do Not Disturb when you’re driving. If you want Do Not Disturb disabled when you drive, you can easily disable the feature in question.

How to Turn Off Do Not Disturb

When your Do Not Disturb turns on without your permission, the best response is to turn it off to ensure you don’t miss any notifications. Then, you can go to fix the problem that’s making it turn off by itself. To follow that timeline, I’ll first show you how to turn off the function on your iPhone before teaching you how to fix the problem at hand.

The quickest way to turn off Do Not Disturb is by swiping down from the top right corner of your screen on your iPhone and tapping on the half-moon icon. If it is displayed with a purple color, the feature is active, while it will be greyed out when it’s inactive.

How to Fix Do Not Disturb Turning On By Itself iPhone

Now that you know how to go about turning off Do Not Disturb each time you have it active, it’s time to learn how to prevent it from turning on by itself. From earlier sections, you should already be aware that your DND schedule is the most likely cause of the problem.

Here are some tips to help fix Do Not Disturb on your iPhone if it keeps turning itself on erratically.

As explained earlier, the most likely reason why your Do Not Disturb keeps turning itself on is that you’ve scheduled it to turn itself on at intervals. You can easily disable this schedule to ensure your iPhone stops turning on the function by itself.

It’s generally recommended to turn on Do Not Disturb when you have your iPhone connected to your car via Bluetooth since all your notifications should come on through the car anyway. If you’d rather not have that happen, you can always prevent it from turning on automatically when you drive.

To prevent the feature from turning on whenever you connect your phone to your car, head over to your Settings app and select Do Not Disturb. Scroll down to the “Activate” option and ensure it’s set to “Manually.” Also, you may want to confirm that the “Active with CarPlay” option is turned off to prevent any awkward behavior.

READ MORE: How to Schedule Do Not Disturb on iPhone

Do Not Disturb is a very convenient feature, but that’s only when you need it. If it randomly turns on without your permission, it causes you to miss essential notifications, making it a real pain. To prevent that from happening, you may want to follow the tips in this article.