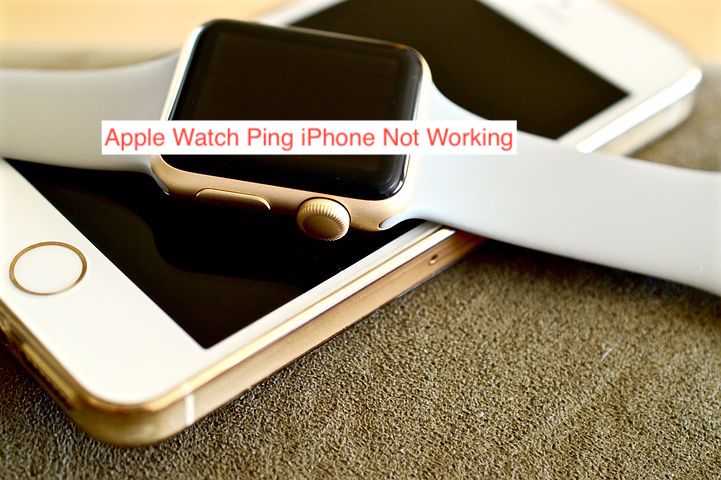 They designed your Apple to work with an iPhone, and you can’t unlock its full functionality without employing the help of an iDevice. To connect your iPhone to your Apple Watch, they must be able to communicate, which is exactly where you may face problems in some scenarios.

Why Is Apple Watch Ping iPhone Not Working

There are several reasons your Apple Watch may work incorrectly and refuse to ping your iPhone. In most cases, the problem is related to a spotty internet connection that makes it difficult for both devices to communicate over a speedy connection.

However, a faulty internet connection is not the only possible reason your Apple Watch may be unable to ping your iPhone. Among several other lesser-known reasons, here are some of the commonest reasons why the Apple Watch ping iPhone doesn’t work.

It gets to a point when the software becomes so outdated that it becomes impossible to use the watch properly. If your Apple Watch is very old, it might have problems connecting with newer devices, explaining why the Apple Watch ping doesn’t work.

One reason your internet connection might be unreliable is due to the activation of Airplane Mode. When you activate Airplane Mode on your iPhone, it disconnects from Wi-Fi, cellular internet, and Bluetooth, making it impossible to make a connection to any device that relies on the internet, such as your Apple Watch.

While it’s very unlikely that the issue with your Apple Watch is due to the hardware, you shouldn’t rule out that possibility. There’s a chance that something crucial is broken in your iPhone, which will prevent you from using the watch to find your phone until you fix it.

One surefire way to know if it’s a hardware issue is to look out for some other faults in your Apple Watch. If the Wi-Fi, Bluetooth, or some other crucial feature stops working, the module handling it has likely failed.

How to Fix Apple Watch Ping iPhone Not Working

When you know the cause of the issues, it becomes relatively easy to find a fix. While the preceding section only talks about the cause of this problem, you should already have some idea of how you can fix the problem just by going over the causes.

However, figuring that out yourself is the exception and not the norm, which is why I’ll show you how to fix the Apple Watch ping iPhone not working. It’s recommended to try these suggestions in the order in which they appear since it goes from the least impactful to the most impactful.

As the preceding section hints, one of the commonest reasons why your Apple Watch may fail to ping your iPhone is a poor internet connection. It only makes sense that you should consider rechecking your connection to the internet before retrying the ping attempt.

When it comes to connection issues between an Apple Watch and an iPhone, it’s not only a matter of your internet connection. The watch also uses Bluetooth to create a connection to your device, and a failure in the Bluetooth system of either device will probably cause issues.

To effect this fix, try pairing a Bluetooth device to your watch to ensure the Bluetooth still works properly. You should also consider disconnecting from your Wi-Fi network and reconnecting again to see if that fixes the problem.

For the Apple Watch, however, the steps are a bit more complicated. Firstly, you need to head over to the Settings app and you’ll see an option for Airplane Mode. Tap on the toggle to switch it on or off, depending on its current state.

READ MORE: How to Get Your Steps on Apple Watch

If you have an Apple Watch, you don’t have to spend hours finding your iPhone when you can simply ping it from the watch. However, there are scenarios where the Apple Watch ping doesn’t work for an iPhone for a variety of reasons.