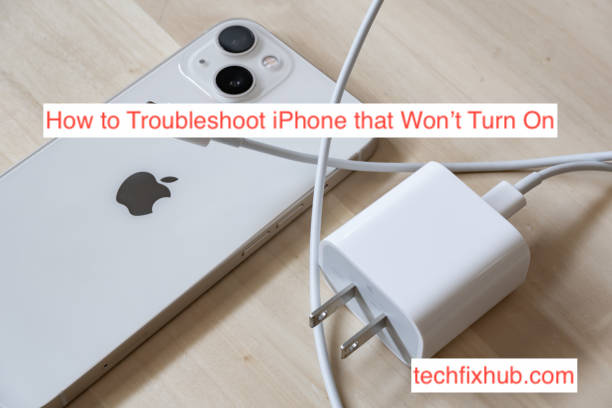 As long as your iPhone keeps turning on, there’s always a lot you can do to fix any problems that might arise as a result of its use. However, what do you do when the device cannot turn on altogether? Believe it or not, iPhones not turning on isn’t rare, and the fact that it has happened to you proves that.

There are many reasons your iPhone may suddenly not turn on, but it may not be as bad as you think. In the severest cases, you may have to buy a new iPhone and that’s all there is to it. However, buying a new iPhone shouldn’t be the first response to a dead phone.

In this article, I’ll show you the recommended troubleshooting steps for an iPhone that refuses to turn on. If you still can’t get it to work after all the steps in this article, the only option left for you is walking into an Apple store and walking out with a shiny new iPhone. Without further ado, let’s get into it.

How to Troubleshoot iPhone That Won’t Turn On

There are several reasons your iPhone may not turn on. However, trying to diagnose the problem is as good as futile since you can’t even get your phone to turn on. The best you can do is to try out all the recommended fixes to see if any will be successful at getting your iPhone to turn back on.

To avoid trying drastic and often unneeded measures, it’s crucial to follow the troubleshooting steps in order. I’ve tried to order this article from the most impacting fix to the least impacting fix to ensure that you get your iPhone working as soon as possible while trying the least amount of unnecessary fixes.]

With that said, here are the steps required to troubleshoot an iPhone that won’t turn on.

While this suggestion may sound very basic, it will fix your iPhone more often than not. When you have the suspicion that your iPhone may have issues, it becomes difficult to use logical reasoning to find a solution. Now that you’re here, take a deep breath, reach out for your charger, ensure it’s working, and plug it into your iPhone.

You should charge your iPhone for at least 30 minutes before you can rule out the possibility of the problem being caused by a low charge. Even if it doesn’t charge for that long, you should consider trying another charger and another cable to see if your iPhone turns on automatically.

However, you can’t force charging to fix the problem if it’s indeed not the issue. Unplug your phone if charging doesn’t get it to work and try out some of the other fixes in this article.

Electronic devices that use a processor are designed to emit some heat when they work. However, when the heat becomes excessive, they slow down to a crawl to prevent their chipsets from burning down from the excessive heat.

When it gets to a specific threshold, the automatic safety mechanism on the device will force it to power down until it’s cool enough to work properly again. An iPhone also works exactly like this and that may be the reason your iPhone is refusing to turn on.

If you’ve been taking tons of photos and videos on your iPhone under a hot sun, this is a likely reason why your iPhone won’t turn on. You can leave the iPhone to cool down for a couple of minutes before trying to turn it on to get it working again.

While you may be tempted to cool down your iPhone rapidly by putting it in a freezer, you’ll only be killing your iPhone by doing that. Instead, try finding a moderately cool and dry place with temperatures that aren’t dramatically lower than normal. That should be good enough to get your device working again.

While this is an unlikely cause of the problem, you may only be turning on your iPhone wrongly. If it’s your first iPhone, you may want to check the manual to learn how to turn on the iPhone before deciding that it’s refusing to turn on.

Depending on your iPhone version, turning on an iPhone might be slightly different across the generations. If you have any of the recently released iPhones, you can turn them on by holding down the side button for an extended period.

However, iPhones with both home and top buttons will require the user to press down the top button instead of the side button to turn on the device. If the button that should turn on your iPhone is broken, the device should automatically turn on as soon as it charges enough.

If your iPhone still won’t turn on after trying all the fixes above, it’s time to try the ultimate fix. It doesn’t matter how serious the problem with your iPhone may look, there’s a very good chance that it has happened to multiple people before you.

While you may get a satisfactory feeling from repairing your device yourself, you’ll likely cause even more problems by trying anything other than what I’ve recommended above. Instead of trying what you don’t know about, you can simply send the device to Apple or any other authorized repairer to have them look at it for you.

If the device is still under warranty, you may qualify for a replacement or a free repair, depending on how repairable it eventually proves to be.

READ MORE: How to Find iPhone Repair Near Me

It’s never pleasant to have your iPhone die on you since nobody wants to buy a $1,000 brick. When your iPhone won’t turn on, there are several fixes to try before deciding that the device has a problem.

If you can confirm that it has a problem, you’ll have to send it back to Apple for repair. Just expect to pay higher than the average joe since there’s a possibility that it’s a pretty serious problem.