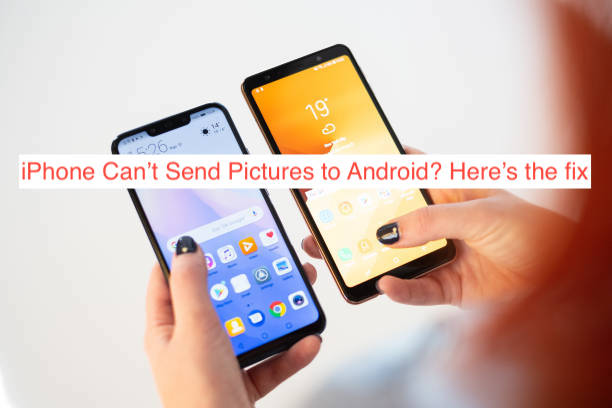 Naturally, you should be able to send pictures to a smartphone running the Android operating system from your iPhone. When you do that, should only expect a potato-quality photo delivery since it uses the age-old MMS standard, which crushes the size of your photos until they’re almost indecipherable.

However, getting pictures of potato quality is better than getting none at all. So, in this article, I’ll focus on the fixes you can try if your iPhone can’t send pictures to Android phone. Also, you’ll learn some reliable alternative methods to exchange pictures between iPhone and Android.

How to Fix iPhone Can’t Send Pictures to Android

If your iPhone can’t send pictures to Android, the solution usually depends on the method you’re using to send the image. Most people use text, and when you transfer pictures using text, it’s sent using MMS. If there’s an issue with your MMS setup, you shouldn’t expect the transfer to be successful.

However, if you’re using alternative methods, you may want to follow some troubleshooting methods specific to that method. Since this article assumes you’re using text exclusively, it will only cover the issues with sending pictures to an Android over MMS.

With all that said, here’s how to fix it when your iPhone cannot send pictures to Android.

If you tried texting an image to an Android user but it failed, it’s almost certainly because you’ve disabled MMS on your iPhone. MMS stands for multimedia messaging, and it’s what you use to send videos and pictures to devices that are not in the iMessage network.

If you’re wondering why disabling MMS doesn’t affect your conversations with other iPhone users, it’s because you’re chatting with them over iMessage and not MMS. You’ve probably noticed that your text bubbles in iPhone-to-iPhone conversations are blue, signifying that you’re not exchanging SMSs.

Fixing this problem is pretty easy since it’s not even a problem to begin with. MMS is always on by default on iPhones and if it’s off for you, you’re most likely the person who changed it. Follow the steps below to enable MMS on your iPhone.

It’s crucial to note that multimedia messages only work over a cellular connection. It usually doesn’t work over a Wi-Fi connection, so you need an actual cellular data connection to send and receive messages using the MMS protocol.

Before trying to send MMS messages to an Android smartphone, you may want to ensure that you do not have Airplane Mode enabled. Also, you may want to keep your SIM card enabled and active since you need cellular data from the SIM to send the MMS.

Even if you don’t remember enabling Airplane Mode, it’s not very difficult to enable it by mistake. You can simply look up your iPhone’s status bar to see if you can see an airplane icon. If it’s there, you may have to disable Airplane Mode using Control Center on your iPhone.

There’s a good chance that you’re on a faulty version of iOS where the MMS feature is broken. If that happens to be the case, the best solution to the problem would be updating the iOS on your iPhone to the latest possible version, which works in certain scenarios.

You can update your iPhone’s iOS version in two ways: you can either go to the Software Updates section of the Settings app by selecting General and then Software Updates. When you get there, your iPhone will automatically search for the latest version and prompt you to install it.

Before proceeding with the installation, ensure you’ve tried all the steps above. As far as we can remember, there’s rarely a time when an iOS update blocks the MMS functionality for iPhones.

While the Messages app is the default option for anyone willing to send pictures on an iPhone, you should consider using an alternative if the intended recipient uses an Android smartphone. As mentioned in the introduction, iPhones don’t play nicely with iPhones, but external messaging apps do.

Some examples of external messaging apps you should consider using include Telegram, WhatsApp, or even email. You can even consider uploading the image to Google Drive while allowing access to the person to whom you intend to send the photos.

iPhones not sending photos to Android phones isn’t a new issue; it has existed for as long as the iPhone and Android competition has existed. However, that doesn’t mean you shouldn’t try to transfer images to phones using different operating systems.

If you’re willing to implement some fixes, you can get an iPhone and an Android phone to play along nicely in terms of photos and video sharing. As a last resort, you may want to consider emailing or uploading and sharing through the cloud if none of the regular fixes work.