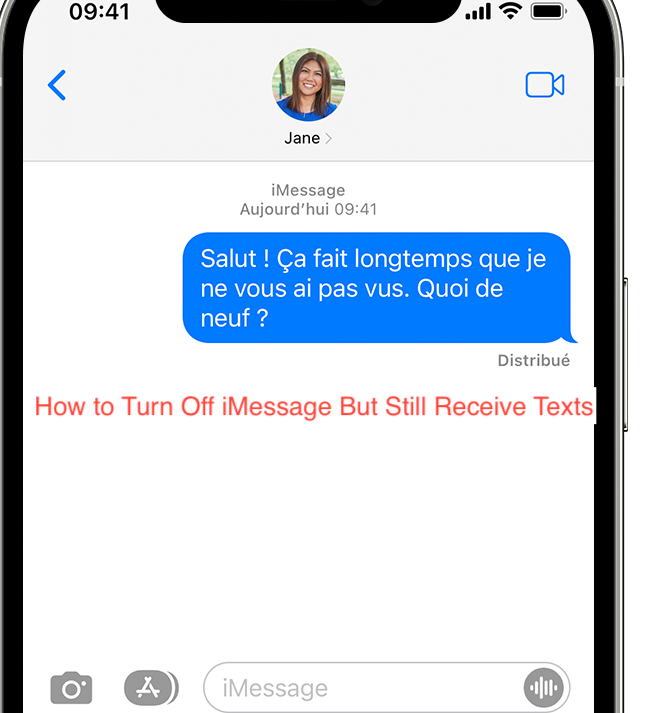 Most people love and swear by the features of Apple’s flagship instant messaging service, iMessage, citing it as the primary reason why they still use an iPhone. Given how convenient the app is, their admiration doesn’t come as a big surprise.

On the other side of the coin, we have people who do not hold similar views of iMessage. If you’re trying to be insanely discrete with your dealings, features like read receipts, instant delivery, and some of the other defining qualities of iMessage are what you don’t want in a messaging platform.

Fortunately, you can safely disable iMessage and continue to send and receive texts on your iPhone. However, your texts will be sent on the SMS protocol (instead of iMessage), they won’t be nearly as secure, you don’t get read receipts, and most importantly, green bubbles!

If you’re fine with all of those caveats, this article will show you how to turn off iMessage but still receive texts. You may not like the experience, but at least, I warned you before signing you up. Without further ado, let’s jump into the tutorial.

Can You Turn Off iMessage and Still Receive Texts?

Before going on with the exercise, it’s crucial to ask: can you even turn off iMessage on your iPhone without losing the ability to receive texts? To answer that question, we have to look a bit into how messages work on an iPhone.

When someone with an iPhone sends you, another iPhone user, a text, it goes through the iMessage protocol, arriving as a message through iMessage. However, if an Android user (or someone with something other than Apple’s OS) sends you a message, it uses the SMS protocol instead.

When you turn off the iMessage feature on your iPhone, Apple starts to see your phone as not running an Apple OS (only when it comes to texts). So, when you send messages to other iPhone users, it goes through the regular SMS protocol, delivering as regular text messages, as opposed to iMessage texts.

So, yes, it’s possible to turn off iMessage and still receive texts on your iPhone. More appropriately, turning off iMessage doesn’t make it impossible for your phone to send and receive texts; it only disables iMessage (as it should).

What Happens When You Turn Off iMessage?

The preceding section has said much about turning off iMessage, but what exactly happens when you hit the toggle to disable iMessage on your iPhone? How does it affect you and everyone having a conversation with you on your iPhone?

When you turn off iMessage, your phone will stop using Apple’s iMessage protocol for texts. Instead, your carrier’s SMS protocol will power exchanges between you and everyone you’re texting on your iPhone. In short, you’ll lose all the amazing features that come with having access to iMessage.

For one, others will see green bubbles for you instead of blue, signifying that you no longer text using iMessage. While that typically signifies that someone is using an Android, turning off iMessage on your iPhone will have the same effect; now you know!

In addition to the green bubbles, read receipts will also disappear. You won’t be able to tell if someone has received a notification for your message or if they’ve seen it. Also, you won’t be able to send stickers or reactions to texts and iMessage games will stop being a thing.

To cut the long story short, there’s no fun in turning off iMessage on your iPhone. Unless you have a legitimate reason to do it, you should probably keep the option on in your Settings since it doesn’t prevent Android users from also texting you.

What’s the Difference between iMessage and SMS?

If you noticed, the preceding section hinted that texts will be routed over SMS instead of Apple’s iMessage protocol when you turn off iMessage. That phrase was a bit technical, and if you don’t understand, here’s the difference between iMessage and SMS.

The biggest difference between iMessage and SMS is the supported devices; SMS supports every single working phone that uses a SIM card while iMessage only supports devices made by Apple. In short, you can only receive messages from and send messages to iPhone users.

There are other big differences too, like the security aspect for example. While iMessage is end-to-end encrypted, just like your WhatsApp messages, SMS isn’t encrypted at all, making it the less secure technology, and it’s not even close.

Also, you don’t need an internet connection to send an SMS since it uses a regular cellular network, while iMessage requires a stable internet connection to work properly. With that said, you can receive messages across all your Apple devices when using iMessage, while SMS only works on the device with the SIM card installed.

How to Turn Off iMessage But Still Receive Texts

To turn off iMessage, head over to the Settings app on your iPhone and select Messages from the options. On the resulting page, you should see an option that reads “iMessage” with a toggle on it that’s set to active. Press on that toggle once and it should grey out, letting you know that you’ve disabled iMessage.

Anytime you get tired of regular SMS (you will soon), you can always revert to iMessage by following the steps above. Again, I should reiterate that disabling iMessage doesn’t prevent you from receiving messages, it only makes it more frustrating.

READ MORE: What Does It Mean When iMessage Doesn’t Say Delivered?

READ MORE: How to Turn iMessage Off for One Person

READ MORE: How To Deregister iMessage

READ MORE: How to know if someone blocked you on iMessage without texting them

Turning off iMessage on an iPhone is pretty easy: simply head over to your Settings app and turn it off. Want to keep receiving texts after disabling it? Don’t worry, Apple has got your back; just don’t expect to be able to participate in iMessage games or group chats anymore tho.