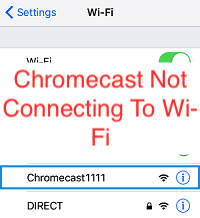 As a Chromecast user, you will probably face one or two problems. The most common problem people face lately is Chromecast not connecting to Wi-Fi. In this concise guide, id show you what could cause the issue and various steps to get rid of the issue.

If perhaps your TV or monitor have a HDMI port (if it doesn’t then you are in the old age techs), you can have a smart device at your hands that would connect to different applications on your devices that is connected preferably presently, the 3rd generation Chromecast is sold at the price of $29.79,the Chromecast with Google TV is of $49.99, the Chromecast Ultra is priced $69.99 but the prices would still differ from one online sale platform to another.

The prices for each model ranges because of the performance and services they offer.

The 3rd generation Chromecast serves a video quality feed of 1080p and an audio feed of 2.0 stereo. This model is simply a plug in -and- play model because all you have to do is insert it into your TV’s HDMI port and you are good to use. It’s a cheap accessory that enables you to stream and surf YouTube, Netflix and basically any app from the Google play store. But for a serious streaming device, it cannot and would not compete with the other models, especially the Ultra.

The Chromecast with Google TV is a device that turns any compatible TV into a all TVs can not power smart one. This device serves videos feed quality of 4k HDR with Dolby vision, it has a built-in Google assistant and it comes with a remote.

There are also several apps that have been adopted from Android TV, that bring games and productivity apps to the streamer.

They often regard the Chromecast Ultra as making the jump from 1080p to 4k HDR video quality. Some people reviewed the Ultra as being cheap for its effectiveness in the 4k and HDR streaming.

This model has an in-built Ethernet adapter, and it’s equipped with the Google home integration. The Chromecast ultra has this unique function of streaming content; it takes a link sent from your mobile device and load up on your TV.

You can stream YouTube videos, Spotify playlist, home security feed and even games. Ultra is the model that performs all the functions of its predecessor and is much better and faster.

Besides the purchase money, no other payment is required to make use of the device besides the subscription with using services like; YouTube,Netflix Hulu, Spotify, and more.

Do you need a Chromecast If you have a Smart TV?

The answer is No; you don’t need a Chromecast if you have a Smart TV but it depends on how modern your TV is, what functions you want and the quality you would prefer. There are some Smart TV produced that have inbuilt Chromecast. Companies like Sony, Hisense, TCL, Toshiba, Skyworth and Vizio produce TV models that have it built-in but if you would prefer the presence of Google in your home, you should have a Chromecast.

How to know if your Smart TV has Chromecast inbuilt.

To know if your Smart TV has the Chromecast built-in; on your Smart TV remote press the HOME button, then select SETTINGS, under the TV category select APP, afterwards select SYSTEM APP under the APP category, Under the SYSTEM APP category, you select the Google Cast Receiver/ Chromecast built-in,enable it and link up with the Google home app on your mobile device for casting. If with these steps you find out that you cannot cast, then you would need the Chromecast device.

What channels are on Chromecast?

Yes, Chromecast comes along with built-in channels that give you a better feel of the device. To state the channels it would be classified and listed as follows;

To set up your Chromecast with your Smart TV, you need to follow these steps;

First, power up your Chromecast by connecting one end of the provided USB cable to it and the other end into the included power adapter (make use of only the adapter provided with the Chromecast package), then plug it into your power socket.

Second, connect your Chromecast to your Smart TV through the HDMI port.

The next step is to download the Google Home app on your mobile device.

How to fix Chromecast not connecting to Wi-Fi

If your Chromecast isn’t connecting to your Wi-Fi network, then you should browse through and follow through these options for a solution;

To set up your Chromecast to a Wi-Fi network for the first time, follow through these instructions for a solution:

First, make sure that your mobile device and Chromecast are both linked to the same account.

Second, start up the Google home app on your device(starting up the app would require you turning on your Wi-Fi and Bluetooth for easy configuration).

Third, tap the “+” icon on the top left-hand side of your phone. Afterwards select “+” icon with the “set up device” option at the front of it.

Tap the “New device” option where descriptions are given under it. To save time, before selecting the above option, turn on your LOCATION, BLUETOOTH and Wi-Fi. During all these steps, your Chromecast must be already on.

Last, Selecting your Chromecast info would automatically link it up with the Wi-Fi available.

We can also follow the steps given above to determine if your Smart TV has a built-in Chromecast.

NO ESTABLISHED CONNECTION BETWEEN Wi-Fi AND CHROMECAST.

If no connection has being established between your Wi-Fi and the Chromecast, check through these options;

This article has shown you the various steps to fix Chromecast not connecting to Wi-Fi. Do you have any other problem you’re facing on your Chromecast device? share it with us thriough the comment section.