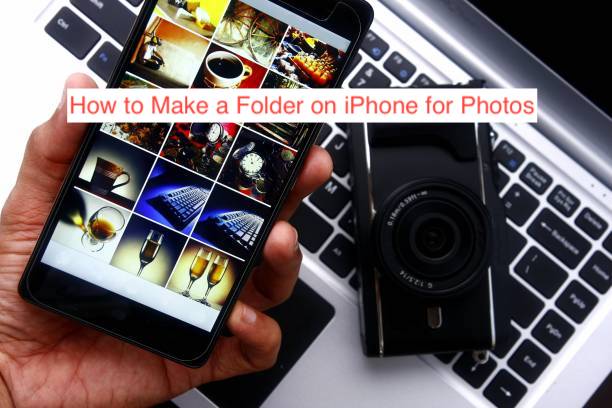 Segregating your photos using folders is one of the smartest moves you can make for digital organization. Not only does it make it a lot easier to find a photo from the thousands of photos that you likely have on your device, but it also makes your gallery neater in general.

If you know how to make a folder on iPhone for Photos, you may find it hard to believe that many people don’t. When you think about it, however, you’ll discover that there’s no clear-cut process that teaches new users how to make folders for their photos.

In this article, I’ll show you the smartest way to segregate the media on your iPhone by creating folders. Also, you’ll learn how to add and remove photos to and from folders, as well as how you can move photos between the folders on your phone. Without further ado, let’s get started.

Folders vs. Albums in Apple Photos

Before learning how to create folders for your photos on an iPhone, it’s crucial to learn the differences between a folder and an album on the Photos app. As you may have already guessed, the two don’t mean the same thing, and they’re on different levels on the organizational tree for media.

A folder is a physical location on your iPhone’s storage, where you can store albums that contain photos and videos. They can contain any media file, including nested albums and even other folders. They’re a great way to organize your photos if you’re moving them across devices using different operating systems.

On the other hand, an album is a container only for storing image files and other media. While you can store an album inside a folder, you can’t store a folder within an album. However, you can nest different albums, making it the default container for media on iPhones.

When it comes to what kind of container should go for which, albums are great for photos that have something in common. For example, all the pictures you take of a particular vacation could go into a specific album for the vacation. Then, you can collect all vacation-related albums into a single vacation folder.

You should also note that individual photos can’t go in a folder; you have to put those in an album first before assigning the album to a specific folder. With the differences between folders and albums on Apple Photos already, let’s jump straight into creating folders to store photos (and albums) on your iPhone.

How to Make a Folder on iPhone for Photos

Once you’ve decided that a folder is what you need to create, making a folder to store the albums containing your photos isn’t that hard. If you take a lot of photos, you’ll find yourself creating folders every so often.

You can always make a folder from right inside the Photos app on your iPhone. To do that, you’ll have to follow the steps below.

How to Add an Album to a Folder on iPhone

As explained earlier, folders can’t store individual photos and videos; those go into another kind of storage container called albums. However, you can add those albums to a folder, and you can even create new albums within a folder you’ve created already.

The steps for creating a new album within a folder on your iPhone are similar to creating a folder. However, moving an existing album to a folder you just created requires different steps, and we’ll take a look at both in a bit.

First, here’s how to create a new album within a folder on an iPhone.

In some cases, you don’t want a new album in your folder. Instead, you want to move an already existing album with photos and videos into the folder. Thankfully, that is possible, but not in the way that you think.

If you want to add an existing album to a new folder, you’ll create an album with the same name as the album you intend to copy. Then, you’ll proceed to select the photos you want in the new album. Since you can separate the photos from their albums and copy them all at once, you can always duplicate the folder and delete the existing one.

You can create a folder on your iPhone for photos through the photos app that comes with your iPhone. In case you don’t know how photo folders work on iPhone, you can’t store photos or videos on it. Instead, a folder contains albums, which in itself is a storage container for photos. This article shows you how to make a folder and add albums to it.