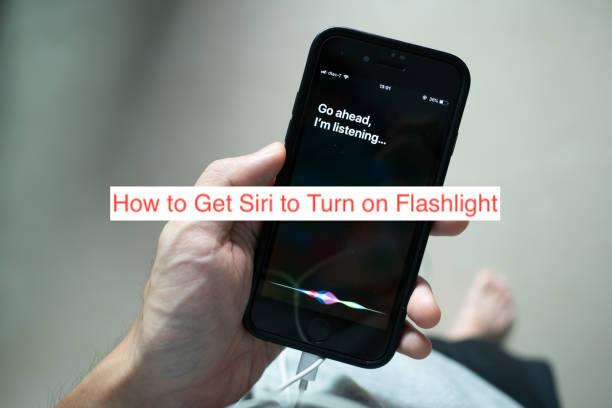 It’s always a joy when you discover a cool trick that makes your phone perform magic suddenly. Maybe you’re not a famous TikToker with millions of followers to get some publicity over your discovery, but you can marvel at your ingeniousness as enable and disable your flashlight by waving a magic wand.

For the uninitiated, you may be at a loss about the correlation between enabling your flashlight and waving a magic wand. However, that would make you one of the few people unaware that you can have Siri complete quite a few tasks by shouting Harry Potter commands.

In this article, I’ll show you how to get Siri to turn on the flashlight, both using the regular way and by shouting Harry Potter commands. Also, you’ll learn additional ways to use the flashlight and change its brightness, and we’ll also see if using Siri is beneficial.

Can Siri turn on an iPhone flashlight?

How to Get Siri to Turn on Flashlight

Before continuing, it’s crucial to note that I’m finding it difficult to imagine a scenario where you’ll want Siri to enable your flashlight. In most cases when you have to use the light, you’ll be holding your phone in your hand, probably looking for something under your bed.

If that is the case, pulling up the control center and enabling your flashlight shouldn’t be too much of a bother. However, if you seem to find yourself in a unique problem, that’s only solvable by having Siri turn on the flashlight, it’s very refreshing to note that it’s possible.

Not only is it possible, but there are multiple ways to go about it. For instance, you can use the regular Siri commands like every other iPhone user out there. Alternatively, you can keep shouting Harry Potter spells if impressing your friends with the magical capabilities of your device is one of your objectives.

Regardless of your objectives, here are some of the best ways to get Siri to turn on the flashlight.

While most iPhone users have confirmed the efficacy of using Harry Potter spells, everything will look silly to you if you’re not a fan of Harry Potter (yes, we exist). Instead of trying to make sense of spells that seem to make no sense, why not use your regular Siri commands and get it over with?

Since they built Siri right into the iPhone, it has access to system-level functions, making it capable of turning your flashlight on or off. By explicitly instructing the virtual assistant to turn on your flashlight, you can easily get it to turn on, or off.

First, say the “Hey Siri” command to bring up the virtual assistant on your iPhone. Note that Siri only works on iPhones, iPads, iPods, and anything else Apple; trying this on an Android phone will not work. After bringing up Siri, say a command like “turn on flashlight” and you should see your phone’s torch go on.

I know this might sound crazy but it’s possible to turn your iPhone’s flashlight on or off by shouting Harry Potter spells. For fans of the franchise, explaining why these spells work as they do is very unnecessary, but I’ll do it anyway for the rest of us that don’t watch Harry Potter.

With that said, here are the different Harry Potter spells you can use to change your iPhone’s flashlight and some reasons they work as they do.

How do you get Siri to turn on your flashlight by saying lumos?

If you’ve watched over an hour of Harry Potter, you should know that this command essentially enables your flashlight. Shouting “Hey Siri” brings up the Siri virtual assistant, and saying Lumos essentially turns on your phone’s flashlight like it does when you say the regular command to enable the flashlight.

If you’re not a Harry Potter fan, you might wonder how and why this works. Harry Potter fans know already that “Lumos” signifies the wand-lighting charm that illuminates the tip of your wand.

For a bit of history, the charm was invented by Levina Monkstanley in 1772 to help look for a quill in a corner. Besides illuminating the end of a wand to help find stuff, the charm also helped to repel ghosts. While your iPhone can do the former, you shouldn’t bet your buck on the latter.

After enabling your flashlight using the wand-lighting charm, you can reverse the process using the light-extinguishing charm, which is the reverse of the former. They created this spell to make the light at the end of the caster’s wand extinguish after usage.

Even if you’ve not watched Harry Potter, you should know what this works for. By calling out the Hey Siri command and then saying Nox, you can easily turn off your flashlight after you’re done using it. It’s the counter to the previous command and it can effectively replace the “turn off flashlight command.”

While the wand will remain illuminated indefinitely without this charm in Harry Potter, the same rule doesn’t apply to your iPhone. Instead of shouting “Hey Siri, Nox,” why not simply open up the control center and turn off your flashlight easily.

Turning on your flashlight should be easy, but easy is rarely fun. To make enabling and disabling your flashlight a bit more interesting, consider shouting some Harry Potter commands to shock your friends.

Note that I’m not a fan of Harry Potter, so forgive my factual discrepancies when it comes to the franchise. If you don’t fancy the series either, you can always use Hey Siri, and then “turn on flashlight” to enable your flashlight with no charms.