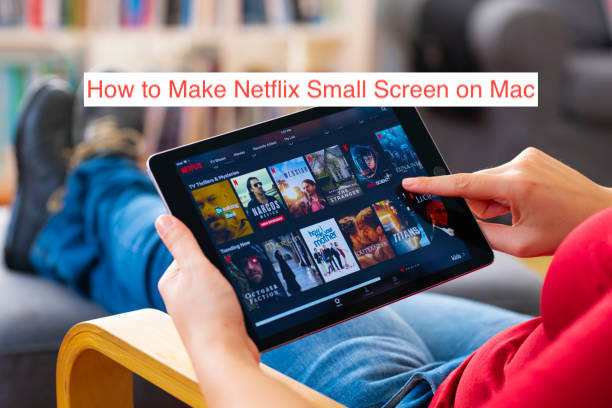 Macs are usually multitasking monsters, thanks to their insanely fast processors and large amounts of RAM. If you don’t do multiple things simultaneously on your Mac, you’re doing it wrong. A suggestion: why not catch up with your favorite movies and shows while you work.

For the uninitiated, picture-in-picture is a feature that lets you make the Netflix window a small screen on your Mac. You can move the window to any location on your monitor while you continue doing anything else on your computer.

What Is Netflix Picture-In-Picture

Picture-in-picture mode for Netflix made its first appearance on the Windows Store app when it first came out on Windows 8.1. When you’re playing a Netflix movie on Windows, you can click on the picture-in-picture button at the bottom left corner to create a floating window.

You can resize the window using your mouse cursor and move it around your screen to prevent it from covering other essential elements on your screen. Since there is no native Netflix app for Mac, picture-in-picture didn’t come to the operating system until a while later.

Some of the browsers that support the feature include Safari, Google Chrome, Microsoft Edge, and Mozilla Firefox. The majority of Mac users use no other browser apart from the ones listed above, making the feature pretty much available to almost anyone that uses a Mac and streams Netflix.

Why Use Picture-In-Picture for Netflix

At this point, it’s clear that the entire guide on how to make Netflix small screen on Mac involves using picture-in-picture. However, one question that may be on your mind is: why should you even use picture-in-picture at all.

There’s the obvious answer, which is that it creates a little floating window that you can keep in a corner of your screen while you continue doing your work. That’s the exact reason why you’re reading this article, which is why listing it at all feels redundant.

Other than those “advantages,” there’s no other reason why you’ll want to watch Netflix on a small floating screen that you can drag around your computer’s monitor. With that said, we can jump into how to make Netflix a small screen on Mac.

How to Make Netflix Small Screen on Mac

In this section, I’ll go into detail about how you can activate picture-in-picture on some of the browsers. Here’s how to make Netflix small screen on Mac.

Since you don’t get a dedicated Netflix app for Mac, you have to find a way to get picture-in-picture to work on whatever browser you’re using to stream Netflix. In this case, I’ll assume it’s the Chrome browser and show you how you can use picture-in-picture for Netflix for the browser.

Since Netflix plays video right in the browser, it’s also eligible for the picture-in-picture mode. To use this mode, head over to Netflix.com and start playing anything. Once it starts playing, a media control icon should show up at the top right corner of the browser window, just before your profile image.

When you click on the media control icon, you should see another small icon that depicts picture-in-picture. Click on it and you should see a floating resizable window showing the same movie on your screen.

When it comes to Safari, getting your Netflix movies to play picture-in-picture mightn’t be as easy as you think. However, the important keyword is that it’s possible and I’ll show you how to make Netflix small screen on Mac via Safari.

Firstly, head over to the Netflix website and start playing a movie as usual. Then, try to make the speaker icon show up in the address bar; that should naturally happen if the movie has audio. Ctrl + click on the audio icon and select “Ember Picture-in-picture,” and a picture-in-picture window should spring up instantly.

Knowing how to set Netflix to run in picture-in-picture mode is a game-changer, since it makes it easier to stream videos while doing something else on your Mac. However, you don’t want to do it too frequently since it destroys your productivity levels.