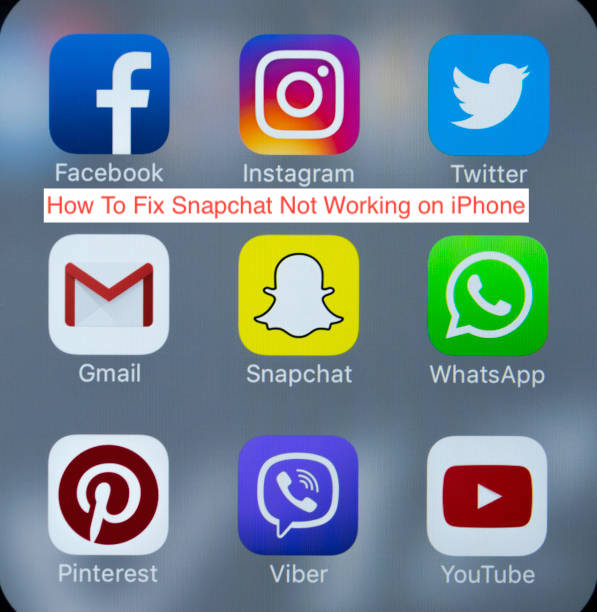 One of the apps most iPhone users use the most on iOS is Snapchat, with billions of downloads on the App Store. Imagine how left out you’ll be when you wake up on a fine day, only to discover that the Snapchat app is no longer working on your iPhone.

If you’re feeling left out for that reason, don’t; you’re certainly not the only person having issues with Snapchat on their iPhone. When you start reading iPhone forums, you’ll notice that a bit too many people also complain about not being able to get Snapchat working on their devices.

Why is Snapchat Not Working on iPhone?

If a specific Snapchat feature isn’t working on your iPhone, the permissions required to get the feature to work may have not been granted. However, if the entire Snapchat app doesn’t work properly, that signifies a more serious problem that needs an urgent fix.

In most cases, the reason why the Snapchat app isn’t working on your iPhone is a spotty internet connection, especially if the camera is loading but you just can’t seem to load up filters. You may want to test your connection to see if it’s the problem.

If your internet seems to be fine, it might also be a problem with Snapchat’s servers. Although it doesn’t happen with any regularity, there’s a good chance that Snapchat’s servers will be down, which will inevitably make it impossible for all users to access the instant messaging platform.

As hinted above also, if a crucial feature like the Snapchat camera is all that isn’t working, there might be permissions you have not granted. Android allows you to review the permissions for individual apps and grant them after the fact if this happens to be the problem.

Of course, this isn’t an exhaustive list of all that could go wrong with Snapchat. If the problem is with anything else, however, one of the solutions I’ll provide below should work for it. Without further ado, let’s take a look at what you should do when the Snapchat app isn’t working on your iPhone.

How to Fix Snapchat Not Working on iPhone

If Snapchat isn’t working on your iPhone, there are a series of fixes you can try to get back to snapping on your device. For a speedier solution, consider reading the preceding section, as it would make it easier to find a solution to the issue with the Snapchat app.

If you aren’t sure how to fix the issue or you don’t even know what it is to start with, here are the steps required to fix the Snapchat app on your iPhone.

Ever since Apple started to go hard on the privacy course, it became much harder for apps to control what permissions they can have. If Snapchat isn’t working correctly for you, it’s almost certainly because it can’t access some permission that is necessary for the app to work. However, this only has a chance of being the issue if you’re only having problems with a specific feature.

Before trying hundreds of fixes, you should consider finding out if it’s even necessary to apply those fixes in the first place. If everyone is facing the same downtime, granting permissions until next week won’t change a single thing.

You can check if the app is currently up using tools like Down Detector and Is It Down Right Now? If either of those tools shows that Snapchat is currently down for users around the globe, you should rest assured; it’s certainly not you, it’s them.

There’s a feature within the Snapchat app that lets you clear the app’s cache, which is equivalent to clearing the cache from the app’s settings on an Android device. Clearing this cache could remove the cached data causing issues with Snapchat, eventually making it work properly on your iPhone.

You can always clear your Snapchat cache by opening Snapchat on your iPhone and heading over to your profile. From there, you can tap on the settings icon to get to the app’s in-app settings. From there, select Account Actions and you’ll see the Clear Cache options. Tap on it once and you’ll be required to confirm your action to continue.

Snapchat has zero tolerance for users that use its app with any modifications or VPNs. To understand how this works, try using Snapchat from a computer using an Android emulator. While pretty much every other app works, it’s impossible to get Snapchat to work.

With that said, if you’re using any third-party Snapchat apps on your iPhone, it might be time to finally uninstall them from your device. You should also consider disabling any VPNs, although, that usually only has a minimal effect on the functionality of Snapchat itself.

When Snapchat not working on iPhone, the best next step is to find fixes that will get it working once again. Fortunately, there are several possible fixes to try, depending on the specific issue you’re having with the app in question.

To get Snapchat to work again, you may want to figure out exactly what’s wrong with your app and the appropriate solution. If you can’t seem to figure out what’s wrong, just start trying the solutions randomly; eventually, you should get one that works.