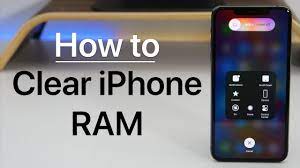 If your iPhone appears to be running, it’s running low on memory, storage, or both. Since you can’t open your iPhone and add another stick of RAM, you must learn to manage your memory yourself by clearing it when it’s full. So, how do you clear memory on an iPhone?

There are several ways to go about clearing your iPhone’s memory to make your phone faster. Sometimes also, the memory may not be the problem you’re having with your iPhone. Instead, you may have to clear your storage to give apps enough space to store necessary files.

In this article, you’ll learn how to clear memory in iPhone to make it run faster. If that doesn’t speed up your iPhone, that wasn’t the problem. In that case, I’ll show you the steps for freeing your storage space without deleting needed files.

What Is RAM, and Should You Clear It?

Memory is a single word for RAM, and RAM is short for Random Access Memory. It is the volatile memory that your iPhone uses for storing data it needs to use in real-time. The memory differs from the device’s storage because it’s several times faster and it can only work when the iPhone is on.

Whenever you’re running an app on your iPhone, it loads the essential components of the app onto your RAM to make it easily accessible when needed. However, the RAM is very limited, and you can only store so much into the RAM before it gets full.

If this happens, the best way to make your device faster is to clear part of your memory. There are several ways to do this, but clearing your RAM is a discouraging way to speed up your device. While it makes your phone faster at that moment, there are a lot of disadvantages to it.

How to Clear Memory in iPhone

Without further ado, here are the steps required to clear your iPhone’s memory.

If you use an iPhone 7 or older, follow step 2 of this tutorial while all newer iPhones should follow the third step. You can skip to the fourth step if you can swipe up on hundreds of apps without getting tired.

And for the disadvantages, clearing your memory manually on an iPhone will take a toll on your battery, as the processor will have to work extra hard to open each of the apps closed to free the memory. Do you even know that your iPhone frees memory space by closing some of the open apps?

When the screen flashes this way, it means you’ve successfully cleared your iPhone’s memory. Trying to open any of your open apps should refresh the app like you didn’t open it previously. Most especially, your iPhone should be several times faster now.

If you use a newer iPhone, you won’t even have a home button (except for the iPhone 8 series). Since the previous solution won’t work, there is another way to quickly close every running app on your iPhone, clearing your memory.

Here are the steps required to clear the memory on your iPhone.

In this article, we’ve shown you how to clear memory in iPhone. Since it differs for old and new iPhones, I’ve outlined both of them and the phones that they apply to.