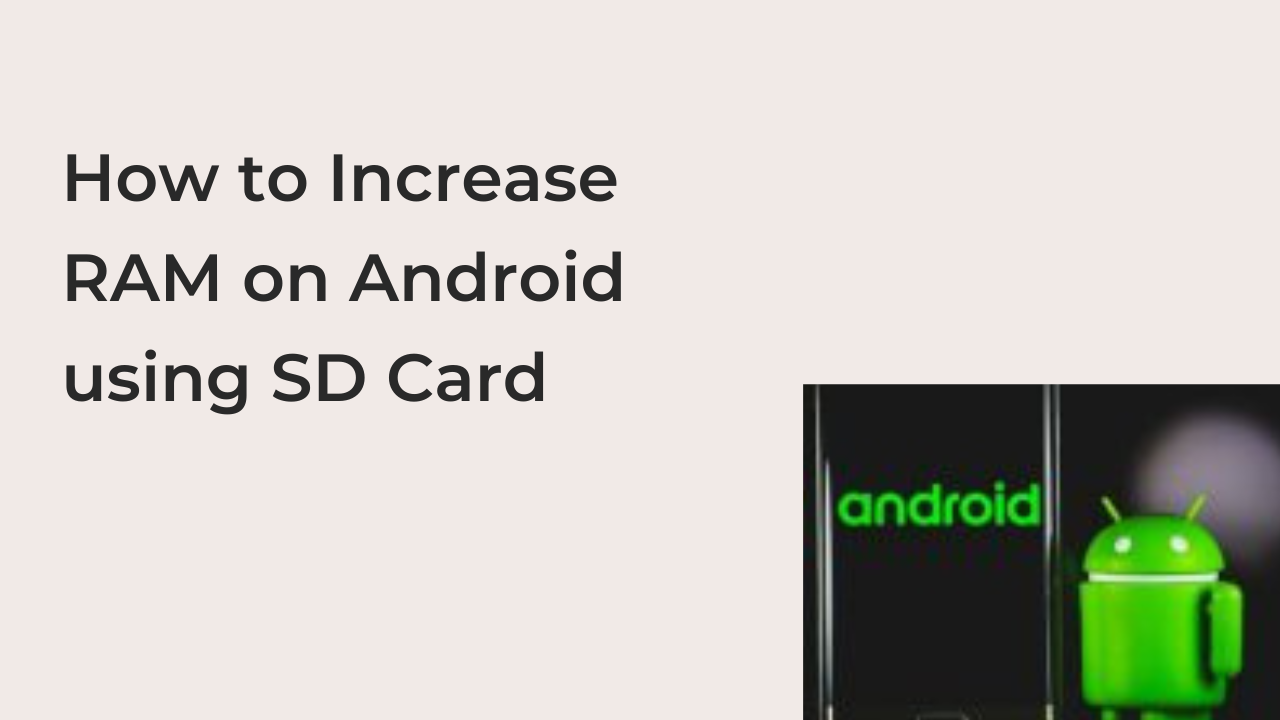 If you’re trying to game on your Android smartphone, the 2GB of RAM that’s widespread on most entry-level smartphones will fare badly. In this case, you have two options; buying another smartphone or increasing the memory on your existing smartphone.

In this article, you’ll learn how to increase RAM on Android using SD card. Also, you’ll learn some of the downsides of this process and why it’s probably better to buy a new smartphone.

Can You Increase RAM on Android?

Firstly, it’s important to note that there are no official ways to upgrade your Android phone memory, unlike on a PC. If you have a Windows computer, you can easily open it up and upgrade the device’s memory to twice or even thrice the default amount.

On a smartphone, however, that’s technically impossible due to the limitations of a smartphone. However, you can increase the amount of available RAM by adding some of the memory from a fast SD card. While this process may work, it’s important to note that it’s not as efficient as physical RAM for a couple of reasons.

Since the SD card is technically not RAM, you should expect serious slowdowns when you merge it with your authentic RAM. That doesn’t make the following process unworthy, as you can always reverse this process if it made your smartphone worse, rather than better.

How to Increase RAM on Android using SD Card

At this point, you should already be aware of some of the limitations of increasing your RAM on Android. If you’re willing to go through with it regardless, I can help you complete the process by providing you with steps and detailed instructions to make it a success.

Here are some of the steps required to increase your RAM on an Android smartphone. To avoid bricking your smartphone halfway, you must always follow these steps to the letter, as mistakes could have drastic consequences.

As I said earlier, there are no official steps to increase your RAM on an Android smartphone. To make it possible, you must make a variety of tools available, all of which I’ll be listing below. If you don’t have any of the following, you should consider getting it before following through with the process.

Here is the list of items required to increase your RAM on Android.

With all of these tools at your disposal, you’re ready to expand the RAM on your Android phone manually.

Before moving on with the RAM increase, you must have a rooted smartphone or the entire process will not work. Rooting your smartphone opens it up to a lot of new possibilities, but also makes it vulnerable to a lot more security vulnerabilities than an unrooted smartphone.

Before rooting your smartphone, you should consider reading about the consequences of rooting a phone. If you think the advantages outweigh the disadvantages, you can download one of the apps used for rooting smartphones.

SuperSU, Kingoroot, BaiduRooot, One Click Root, and many other rooting apps will help you root your smartphone in a couple of minutes, making it ready for the RAM increase.

Since you can’t partition your SD card on your smartphone, your Windows computer can come in handy here. Using the SD card reader, insert the microSD card into your computer and format the storage device.

Then, create multiple partitions on the SD card, changing the filesystems to EXT2, EXT3, or EXT4, depending on the order of the partition. You can save the partition by clicking on the confirmation and you should have a perfectly partitioned SD card.

After partitioning your micro SD card, you can link it to your smartphone using an appropriate app. An app like Link2SD can do this perfectly, as long as you give root permission to the app before attempting to link the SD card to your smartphone.

After linking the SD card to the smartphone, you’ll need a root swapper to always tell your device to switch to the additional RAM each time the phone’s default RAM is full. For that, you can use the Swapper app. This app creates a .swp file that increases the RAM of the phone and sets up the swap system.

While these processes will help increase your RAM, you should always hope that you never have to swap to the slower SD card storage. When you do, your RAM will work at SD card speed, slowing down your device and making the entire user experience painful.

Again, this is not the best way to enhance the performance of your device, as it does little to increase performance. But if you need the extra RAM to complete some system qualifications, then trying this out may help increase the memory that your phone thinks it has.