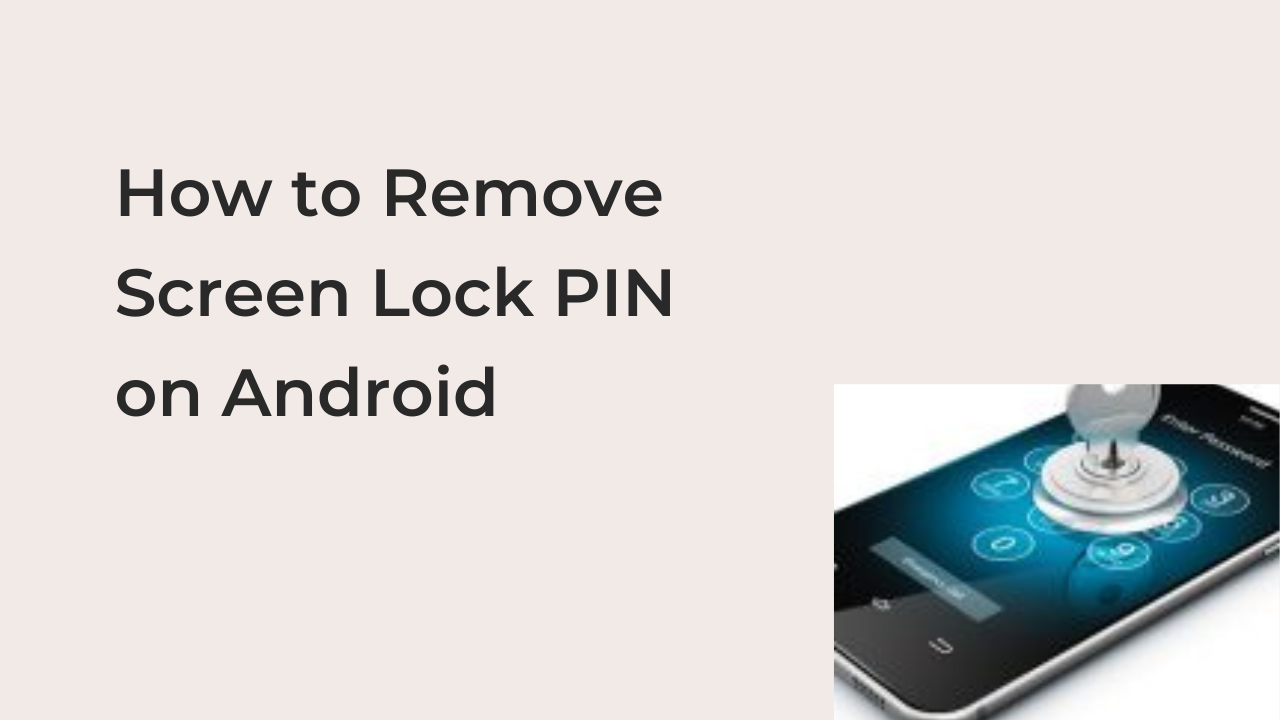 A screen lock PIN is great for securing an Android smartphone but many people don’t want to have to type a four or six-digit PIN each time they need to unlock their smartphone. While this mightn’t be a smart security measure, you own your device and it’s your choice.

Before going on to remove your screen’s lock PIN, you should know that you’ll automatically remove the fingerprint or face unlock system too. This leaves your device vulnerable to attacks with no security system to prevent an authorized person from accessing your device.

In this article, you’ll learn how to remove screen lock PIN on Android. If you don’t know how this might be useful, I’ll show you some of the practical applications of this solution in the real world.

Should You Remove Your Screen Lock PIN on Android?

Unless you’re in one of the few scenarios where it’s necessary to remove your PIN, you should generally avoid removing the PIN from your Android’s lock screen. Even if you’re replacing the PIN with a pattern or a similar security system, removing it is still very hard to justify, especially if you have a biometric fingerprint or face unlock system.

The first disadvantage of removing your screen lock PIN is that you cannot use fingerprint or face unlock unless you replace it with a pattern lock. However, locking your phone with a pattern has certain disadvantages, which I shall discuss below.

Assuming you’re not replacing it with anything, anyone could simply pick up your phone and look through your sensitive pictures and videos without your permission. Also, leaving your phone unlocked is a great way to incentivize thieves to steal your phone.

Even if you’ll be replacing the screen lock PIN with a pattern, it’s no secret that a pattern is way less secure than PIN unlock. Pattern unlock is generally disliked because anyone looking over your shoulder can pick up your pattern 60% of the time. The 40% of undecipherable patterns are those that are willing to draw it across all nine points.

The above arguments don’t imply that there aren’t times when it’s best to remove your screen lock PIN. For example, if you’re selling or giving away your phone, it’s way better to remove the PIN and wipe the device than tell the recipient what the PIN was.

In the same vein, you may want to remove or change the existing PIN if you bought a used device with a PIN. However, it’s important to note that you must know the previous PIN before attempting a change unless you’re willing to wipe the phone using sophisticated tools.

How to Remove Screen Lock PIN on Android

Before going on to attempt the steps below, you must ensure that you have access to the previous PIN on the device. Without it, it’s virtually impossible to complete the process on most devices, and the majority of devices will simply wipe all of your existing data.

With that said, here is how to remove the screen lock PIN on your Android smartphone.

1. Launch the Settings app from your device’s home screen or the app drawer. You can also access this function from the notifications panel, which is a shortcut for almost all recent Android smartphones.

2. Select the Security option from the Settings app. Selecting this will bring up a slew of options relating to the security of your device and data, making it the most appropriate place to house the PIN-changing functionality.

3. Depending on the make and model of your device, you may have to select “Screen Lock,” “Lock Screen Password,” or any other thing that looks similar to that. This should require you to enter your existing screen lock PIN. Enter the PIN you got earlier to bypass this screen and continue with the process.

4. On the resulting screen, select the “None” option, which removes any form of screen lock that was on the device. However, your phone will always jump to the home screen once you hit the power button and the fingerprint scanner or face recognition system will stop working for device unlock.

If you want to keep seeing your phone’s lock screen, you should select the “Swipe” option instead of none. The swipe option will also remove your phone’s fingerprint and face unlock systems as well as the PIN, but you’ll always have to swipe up from the lock screen to access your home screen.

How to Remove Forgotten Screen Lock PIN on Android

Going through the guide above, it’s evident that you’ll need the previous PIN to remove the screen lock PIN on your smartphone. If you were always the owner of the smartphone, you should readily know the PIN, unless you’ve not used the phone in a long while.

Since forgetfulness happens, you may want to learn how to remove the screen lock PIN on your Android smartphone after forgetting it. Unfortunately, however, most smartphones do not let you recover your PIN once you forget it, especially if you can unlock the phone with fingerprint or face unlock.

If your phone isn’t one of those, you can enter the wrong password multiple times to bring up the forgotten password option. Then, you can log in to your Google account to remove the forgotten PIN from your device.

Removing your screen lock PIN from your smartphone isn’t what you’ll want to do on your daily driver, but it’s necessary for certain scenarios. As one of the sections of this article recommended, you should always remove your PIN, pattern, and fingerprints before selling or giving them out.

This article has outlined the necessary steps required to remove the screen lock PIN on your Android device if you know what the PIN was. Also, there is a separate section for removing a forgotten PIN, although, you’ll need to sign in to your Google account to complete it.