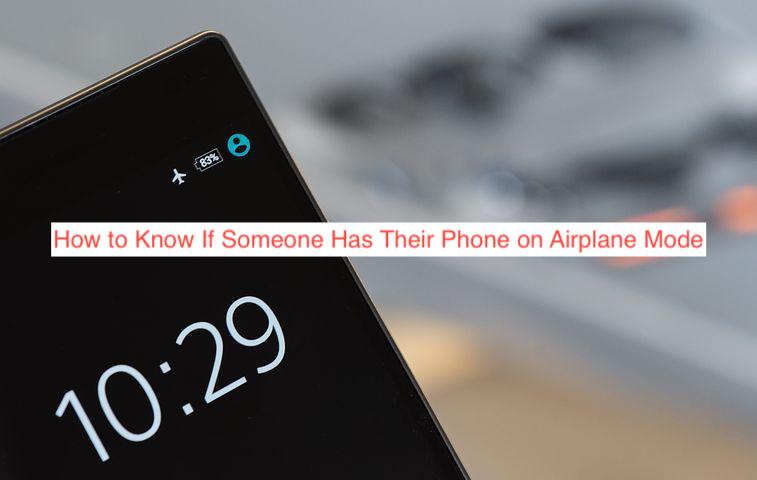 Airplane Mode is a feature on every modern smartphone that lets the user disconnect from any network connection instantly. In some smartphone models, it’s referred to as flight mode, but both flight mode and Airplane mode mean the same thing.

One of the biggest confusions that smartphone users face is telling when someone has their phone on airplane mode. Apparently, cellular operators won’t tell you a phone is on airplane mode when you try to make a call or send a text.

So, how do you know if someone has their phone on airplane mode? In this article, you’ll learn how to discover that and why you should even care. In addition to that, you’ll also learn what airplane mode is in detail and what it does to your phone.

What is Airplane Mode?

Airplane mode, also known as aeroplane mode or flight mode in some countries, is a smartphone feature that stops all signal transmission as soon as you turn it on. With airplane mode on, you’ll be unable to do anything that requires signals.

Airplane mode got its name from the policy on many planes that prevent you from carrying wireless devices that transmit signals. While it hasn’t been sufficiently proven that the signal from your phone can interfere with an airplane in any significant way, who wants to put it up for the test?

When you enable airplane mode, you instantly lose the ability to send text messages, make calls, or access the internet using mobile data since all of those activities require you to connect wirelessly in one way or the other.

Also, airplane mode disables Bluetooth and Wi-Fi once you turn it on. If you have any devices connected via Bluetooth, they’ll instantly disconnect as soon as you enable the feature. Also, enabling airplane mode will end your device’s connection with any Wi-Fi router, cutting you off from the internet.

In most cases, airplane mode shouldn’t disable your phone’s GPS since that functionality doesn’t rely on radio waves. Instead, it uses special signals from GPS satellites to work, and airplane mode doesn’t have to interfere with that. You can turn it off manually if you don’t need it active on your phone.

When you have airplane mode enabled on your smartphone, you should see an airplane icon on your phone’s status bar. However, the question here isn’t for your smartphone. It’s for someone else’s! In the next few sections, you’ll learn how to know if someone has their phone on airplane mode.

How to Know If Someone Has Their Phone on Airplane Mode

When you make a call, it’s either reachable or it’s not; there’s no in-between. In some scenarios, the other person might be in another call, but yours should go through, giving them a choice to choose if they want to answer your call or continue their existing conversation.

When a call is unreachable, there are a couple of possibilities: the phone might be switched off completely, the intended recipient might be in a place with no cellular signal, or they might have their phone in airplane mode. Sadly, you don’t usually get a breakdown of why the call was reported unreachable.

In this section, you’ll learn how to know if someone has their phone on airplane mode. With that said, here are a few tips.

Once someone enables airplane mode, their Wi-Fi and Bluetooth connections will turn off instantly, sending them online. While they can choose to enable Wi-Fi afterward, someone enabling airplane mode is most likely not looking to spend a lot of time online. Even if they plan to do, you can still try a call to confirm if they’re active.

The first two suggestions only make any sense if you don’t have access to the other person’s smartphone. If you can access it, you can easily enable airplane mode without necessarily calling or checking their online accounts. Simply check the status bar on their phones and you’ll see it, even if the device is locked.

Why Do People Have Their Phones on Airplane Mode?

There are a couple of reasons people keep their devices on airplane mode always. For one, they may want to disconnect from the digital world, purge themselves of all those annoying notifications, and take a well-deserved break from all internet activities.

Focusing on a particular task will also be easier without the occasional dings and rings from your smartphone. When some people try to get some work done, they begin by turning on airplane mode on their devices, which essentially prevents those notifications from coming in.

Conserving battery power is another reason why you may want to consider enabling airplane mode. When you have the mode enabled and running, those signals will continuously seep power, making it more difficult for your battery to hold a charge.

If someone has their phone on airplane mode, you’ll be unable to call them. The call will report unreachable and go straight to their voicemail. Also, there’s a pretty good chance that they won’t be able to stay connected to the internet.