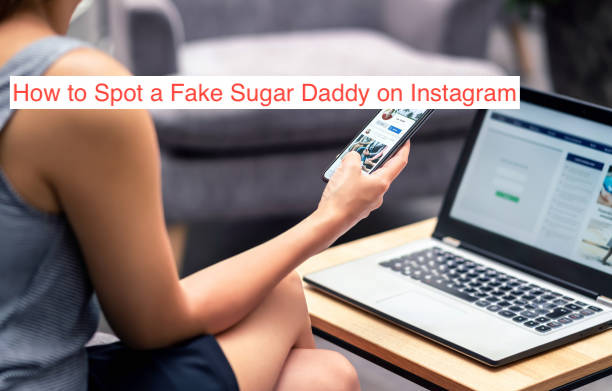 No jokes; if you’re on this article, I assume you already know what the problem is: there are more scammers than legitimate sugar daddies on Instagram. Not only does this waste the time of sugar babies in search of a heartthrob, but it can also cost them money if they’re not careful.

Instagram is unarguably one of the biggest places to connect with sugar daddies from all around the world. However, we all know that the bigger a platform is, the more likely they are to harbor scammers who are just out for your hard-earned money.

To avoid the unfortunate case of losing money to scammers, this article will show you how to spot a fake sugar daddy on Instagram from afar. Before going on Instagram on another search for a sugar daddy, you may want to have this article at the back of your mind to avoid falling into scams.

What Is a Sugar Daddy?

A sugar daddy is an old man that’s seeking romantic companionship from younger ladies with money as an incentive. The younger lady in the relationship is referred to as the sugar baby, while the wealthy old man is, of course, the sugar daddy.

A sugar daddy typically takes his sugar baby out for shopping sprees and buys them expensive items. The sugar daddy market is a fast-growing one, with many younger ladies now picking interest in becoming a romantic companion to older men for financial incentives rather than sticking with younger guys.

This article isn’t trying to question the morality of the system; what it aims to do is to help potential sugar babies avoid scams by learning how to spot a fake sugar daddy on Instagram. The following section will show you how to do just that.

How to Spot a Fake Sugar Daddy on Instagram

If you’re a potential sugar baby looking to meet up with a sugar daddy, you’ve probably fallen victim to one of the sugar daddy scams. Unserious scammers posing as sugar daddies lurk around websites like Instagram, trying to extort money from people like you offering no real service.

I know you’re smart and you can tell a scam from afar, but you don’t know what you can do when you’re desperate. Instead of learning the hard way, why not check out these five ways to spot fake sugar daddies on Instagram?

With little rambling, here’s how to spot a fake sugar daddy on Instagram.

Many of the scammers that pose as legitimate sugar daddies reuse the same set of pictures over and over again on their Instagram profiles. While the pictures might look okay, they usually lack variety, and the profile isn’t usually updated with new photos over time.

Also, the photos try to show that the person in question is very wealthy, which is always the case for a sugar daddy. However, when someone starts taking photos of themselves with wads of cash each time, they’re probably trying too hard to prove their wealth status, which is a red flag.

Also, you shouldn’t even waste your time on a sugar daddy that has locked their profile. If they won’t let you see their pictures, isn’t that an indication that they have something up their sleeve?

Scammers don’t usually put much thought into naming the Instagram accounts they use to perpetrate fraud. In some cases, they use automatically generated usernames, which you can tell by the number of numbers that appear at the end of the username.

Also, if the display name tries to give off a wealthy connotation, you should probably back off. Real wealthy sugar daddies don’t spend their entire lives trying to convince you they’re rich; that realization should come to you as you interact with them.

One of the surest ways to know an inauthentic sugar daddy is that they message you out of the blue and start expressing deep affection like they’ve known you all their lives. When someone you barely know comes out of the blue and starts telling you how much they love you and how they can’t survive without you, you’re probably talking to a scammer.

If the sugar daddy is real, you should see your conversation progress naturally over time. Authentic sugar daddies don’t show excessive affection without getting to know you first and they’ll likely push to meet you in person.

A funny thing about scammers is that they’re usually not very smart. They think the best way to a lady’s heart is to show that they have enough money to win them over, and while money is one of the factors, they overdo it so much that it becomes unnatural and ridiculous.

If you’ve been reading the explanations to each of the points I’ve made so far, you’ll notice they all build up to bragging about their money. The reason they tend to brag that much is to entice a potential sugar baby as quickly as possible, and they often make a mess out of it.

The best sugar daddies on Telegram are the ones willing to listen to you and build a lovable relationship with you slowly. While a financially-motivated relationship with an older man isn’t the most romantic thing in the world, it’s not illegal, as long as both parties are of legal age.

To avoid getting scammed on Instagram, you may want to vet the pages of potential sugar daddies to ensure you’re not interacting with a scammer. This post has listed four warning signs that should show that you’re conversing with a fake sugar daddy.