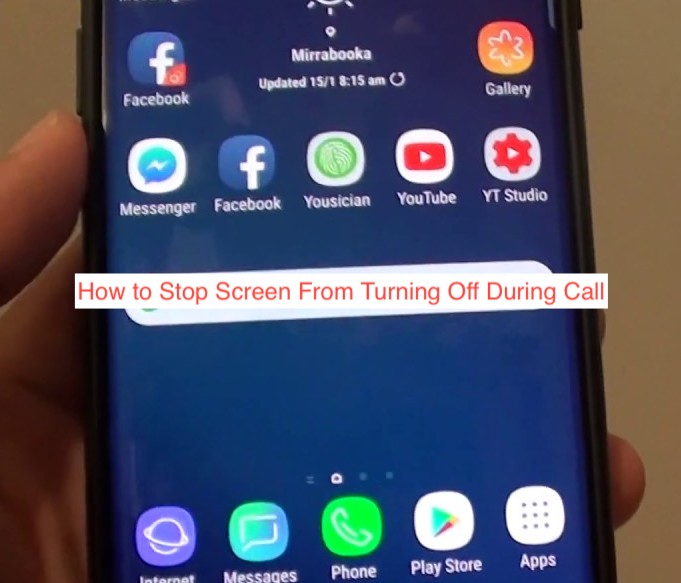 When you make or answer a call, you’ll notice that the screen always turns off throughout the call. This behavior happens on all phones across all operating systems, including Android phones and iPhones, but not everyone seems to like it.

Why Your Phone’s Screen Turns Off During a Call

Before trying to fix the “issue” of your screen turning off during a call, it’s essential to determine if it’s even an issue, to begin with. One way to do that is to learn why and how your phone’s screen turns off whenever you’re in a call.

If you’ve noticed, your screen turning off only happens when you put your phone to your ear. Also, your device resumes normal activity once the call ends, turning on the phone’s screen and letting you operate your phone as normal again.

The behavior is a feature and not a bug; your phone is designed to work that way. When you make or answer a call, your proximity sensor kicks in to detect when you put the phone to your ear. Once the sensor detects that it’s close to your ear, it will automatically turn off the screen.

There are a couple of reasons why this is the case. The most important one is to prevent you from making accidental taps and presses during the call. You don’t have eyes on the side of your head, but your ears are more than capable of making taps on your phone’s screen. Your phone turns off its display during a call to prevent those accidental taps by your ear.

Another reason is to save power during the call. If you didn’t know already, your screen is the single hardware component that consumes the most power from your phone. Turning it off when making a call is an excellent way to save your battery since nobody ever uses their phone during a call.

With all that said, however, you can stop the behavior from happening during calls if you don’t fancy it. In the following sections, you’ll learn how to stop your screen from turning off when you make calls. There are separate sections for iOS and Android, so you can jump to the appropriate one for your device.

How to Stop Screen From Turning Off During a Call

If you don’t want your screen to turn off automatically during a call, you can turn it off in the settings, at least for most smartphones. You may want to do this if you have a broken proximity sensor that always detects your phone as close to your ear, even when it’s not.

Before continuing, however, I should emphasize that I do not recommend turning off this behavior on your smartphone, as it has many practical uses. If you intend to use your smartphone during a call, hold it in your hand as you’d typically do and press the side button if the screen doesn’t come on intently.

However, if you want to keep your phone’s screen on, some smartphones will allow you to do that. With that said, the process isn’t as simple as it seems since it has been accepted as the industry standard behavior for mobile phones during a call.

Most Xiaomi Redmi phones hide a proximity sensor control within the settings that let you enable or disable the entire sensor. Disabling it prevents your device from being able to use the sensor, blocking access to a lot of features that you should be able to access otherwise.

Some other Android smartphone models also offer this feature, but I can’t assure uniformity across all makes and models of Android smartphones. If you don’t like the screen turning off when you make a call, you should probably get a Xiaomi Redmi phone when next you’re in the market for a phone.

Some third-party apps claim to keep your screen active during calls, overriding the default behavior of your smartphone. However, I haven’t tried any of those apps and I won’t recommend any; jump into Google Play Store to see if you can get some recommendations.

How Can I Stop Screen Turning Off During Call iPhone?

The proximity sensor is not exclusive to Android smartphones; iPhones also use the feature to power a lot of features, most notably, the feature that turns off your screen during a call. If you don’t want your screen to turn off when you make calls on an iPhone, I don’t think you have too many choices.

As far back as I can remember, I can’t recall any iPhone giving you the option to turn off your proximity sensor. Your screen will always turn off when you put your phone to your ear during a call, and there’s nothing you can do about it.

If you want to use your phone during a call, put it in hands-free mode and put the phone away from your ear. Alternatively, you may want to connect a pair of AirPods to your iPhone to make it easier to make calls on your iPhone without having to put your phone to your ear.

Another option is ditching your iPhone. While this is much harder than the other suggestions I’ve made earlier, it’s a genuine way to keep your screen from turning off during a call. And, what’s the difference between Android smartphones and iPhones anyway?

You can easily stop your screen from turning off if it has an option for you to disable the proximity sensor. If you use a phone that doesn’t support it, like iPhones and Samsung phones for example, you have to simply live with it.