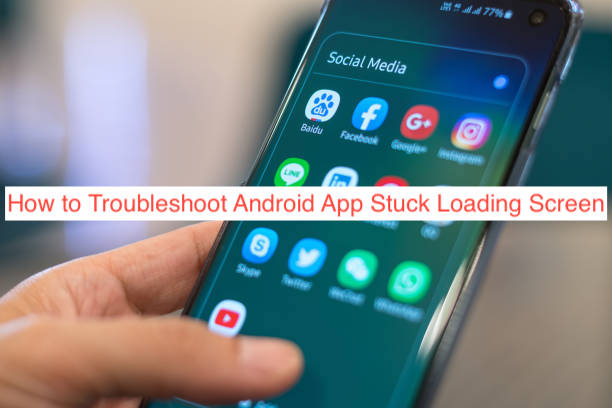 Sometimes, you try to open an app on your Android phone only for it to get stuck on the loading screen without ever opening the app. Since apps are designed to open and run, this is an obvious problem that you should consider solving if you encounter it.

There are many reasons an Android app may be stuck on the loading screen. The application package may be corrupt, the device may be too slow to run the app quickly, or there might be a cache error.

Regardless of what the problem is, there’s almost always something you can do about it. In this article, I’ll show you how to troubleshoot Android app stuck loading screen. You’ll also learn why this happens and how you can avoid it.

Unless the app is corrupted in and of itself, you should be able to solve the issue of apps getting stuck on the loading screen pretty easily. In most cases, it’s your device running so many processes that it doesn’t have enough resources to make the app run decently.

Depending on how much troubleshooting you’ve tried already, there are many other fixes to help solve the problem. Without further ado, here are some of the most effective ways to troubleshoot Android apps getting stuck on the loading screen.

If the problem with the app is a minor error with one of the frontend services, turning off your device and turning it on again should clear all the issues and get the app working perfectly again. However, this solution isn’t a 100% sure solution; there’s still a chance that it’s not just a minor error.

Rebooting an Android smartphone is pretty easy, and it’s one of the functions that aren’t very different across different models and generations of Androids. If it’s an Android, holding down the power button should bring up a reboot option that you can swipe or tap restart your device.

If the problem persists after rebooting your iPhone, it’s either from a corrupted APK or a faulty cache. A faulty internet connection can also be the culprit in some apps, so you may want to check that first.

There are tons of apps on Android that rely on an internet connection to even function at all. Every Android user has that app that will never stop loading if you do not connect to Wi-Fi or cellular network, or any other internet in any form whatsoever.

Before going on to try more drastic measures in an attempt to fix the Android app loading screen error, you may want to check if your internet connection is working perfectly. You can do that by restarting your router and reconnecting to it to see if the app loads up.

If you have cellular internet, you may want to switch from Wi-Fi to cellular to confirm that your Wi-Fi isn’t having problems. After trying all these, if you still think the internet connection isn’t the problem, you can jump to the next section, which explores more drastic measures.

In some cases, however, your device may unknowingly save incorrect app data and cache, causing weird errors like the one in question. Fortunately, you can always head over to the Settings app to correct any issues with critical data like the cache.

To get started, launch the Settings app on your device and scroll down to find and select Apps and Notifications. From the resulting page, tap on “All Apps” to see every single app you’ve installed on your device sorted by what value you choose.

Scroll to the app in question and select it from the list. From the page that comes up, you should see options for the app storage and the cache and data. Tapping either of them should give you options to clear them, enabling the app to work properly again.

If none of the recommended solutions have worked for you so far, you’re likely using a corrupted application package that’s incapable of running at all. To make it run, you may have to reinstall it from the Play Store to ensure that you have a full version of the app.

App corruption happens frequently when you download apps from the internet and sideload them onto your phone. While there are several disadvantages of that practice, the major one that should get plenty of attention is the app not running at all.

One reason certain sideloaded apps won’t run is that Google is slowly moving to application packages, instead of a single executable file. Instead of having a single humongous 1GB APK, the developer makes several split APKs, so you only download what you need to run the app.

However, the primary problem with that is that there is currently no way to install split APKs correctly without going through Google Play. If you downloaded an app that doesn’t go past the loading screen, you should consider uninstalling it and going for the Play Store version.

Note that this troubleshooting step doesn’t apply to apps that are unavailable on the Google Play Store altogether.

READ MORE: Why is My Android Phone Making Static Noises?

You don’t always run into Android apps that get stuck at the loading screen, but they’re not nonexistent either. If you’re fond of sideloading apps that you sourced from sources across the internet, you shouldn’t be surprised to learn that you’ll run into this issue pretty often.

There are plenty of fixes to rectify the problem when it happens. However, the biggest preventive measure you should always try to adhere to is sourcing all of your apps from the Google Play Store.

1 thought on “How to Troubleshoot Android App Stuck Loading Screen”