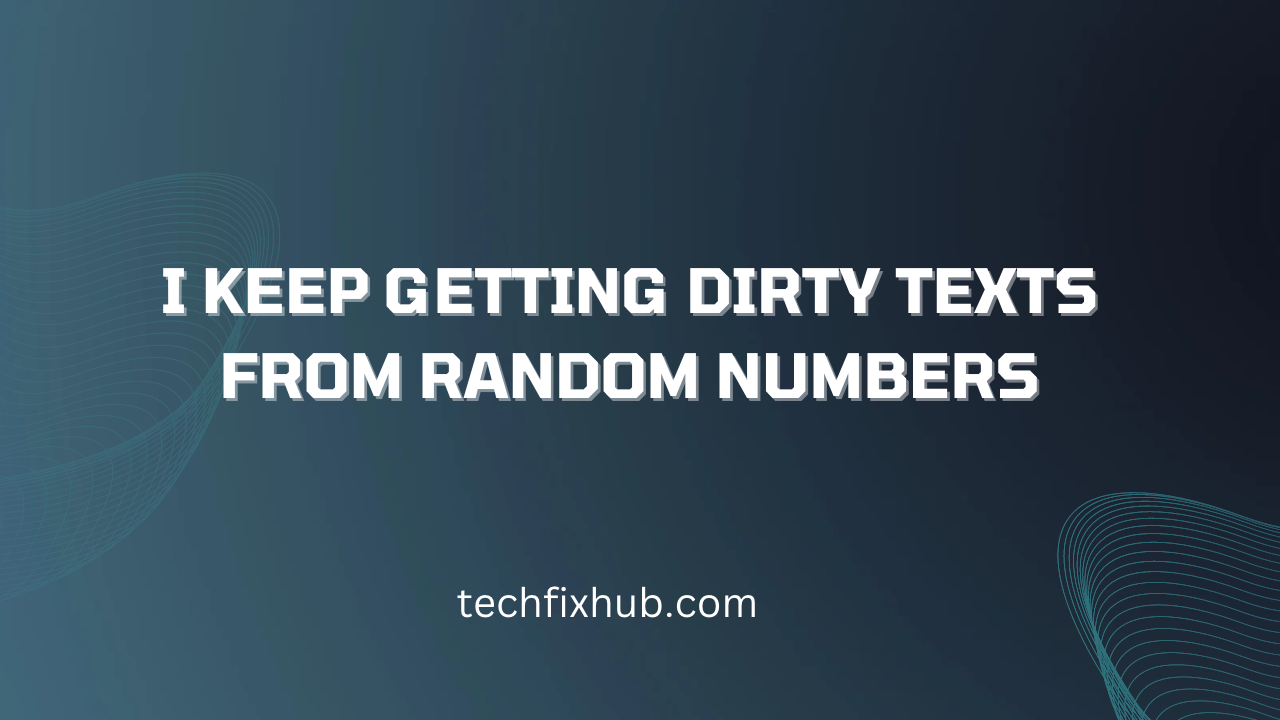 Advancements in technology have been well used and misused. It wouldn’t be advisable to ditch your technological devices because you’re getting dirty texts from random numbers out for your credit card number.

These texts aren’t only intrusive, they’re also downright offensive, especially when you have kids who have almost unrestricted access to your phone. To avoid exposing younger members of the family to these texts, you must find ways to get rid of them completely.

In this article, I’ll show you how to stop getting random texts from unknown numbers. If you came across this article without facing this problem yet, the fixes mentioned below should help prevent any future occurrence of this issue.

Why would someone send me a spam text?

Can you find out who the texter is?

If you don’t want to take the risk of replying the spam text, there are many to know who is texting you.

How to Stop Getting Dirty Texts from Random Numbers

Start scrolling through any internet forum and you’ll be sure to see someone complaining: “I keep getting dirty texts from random numbers, help.” If this sounds like the same problem you have, you should read this article before taking any step further.

Here are the steps required to stop getting dirty texts from random numbers.

When you receive a dirty text from an unknown number, you’d be inclined to write a strongly-worded reply warning the sender never to send similar messages again. While that’s the most logical conclusion, it might just be the worst response to such an incident.

Most of the time, such messages come from an automated system that sends text messages to random numbers bought off the internet. However, they don’t usually know if the number is active or inactive. The only way to know what numbers are active is to log the numbers that reply to the messages.

When you reply to these messages, the automated systems can confirm that your number is indeed active. Instead of the messages stopping as you hoped, there’s a higher chance of the problem persisting with time. So the best thing you could do in case you get any of those messages is to avoid replying.

Another mistake that most people make after getting an unsolicited text from a random number is to click on the accompanying link. It doesn’t matter how enticing it looks; when you get a message from someone you don’t know, avoid clicking any links.

In most cases, the links that accompany these messages are phishing links. When you click on them, they may take you to websites that encourage you to drop your credit card numbers or passwords to your sensitive accounts. To avoid taking any chances, it’s best to avoid the links altogether.

If you’ve replied to the messages, all hope isn’t lost; there are still many strategies that may help you stop getting these texts. One of the most effective strategies is enabling the built-in spam protection feature on your device’s settings app.

Spam protections work by comparing the numbers texting you with those that people have frequently reported as spam. If there are matches, all messages from those numbers will go directly to the spam section, cleaning up your inbox.

The default Messages app on Android smartphones has this feature enabled by default, but you can still try confirming if that’s the case with your device. To enable the Spam Protection feature on your device, follow the steps below:

For the spam protection feature to work correctly, you must set the Messages app as the default app on your device. If you haven’t done this, you can always do it anytime in your device’s settings.

After enabling the spam protection feature on your device, you can help it become better by actively reporting offending numbers to develop Google’s spam detection algorithms. One way to help train these AI algorithms is by constantly reporting offensive text messages as spam and blocking the senders.

This creates a win-win situation for you and Google, or whoever the creator of your messaging app is. Firstly, reporting as spam helps them block more spam, improving their algorithm while blocking the number means you won’t get similar texts in the future.

Since the steps for reporting spam and blocking senders differ across messaging apps, you should consider finding that yourself. However, most apps will denote the block feature with a “Block,” “Block Sender,” or “Block Number” option.

If you’re not satisfied with the spam protection feature included in your Messages app, you may want to consider using a dedicated anti-spam app. There are hundreds of these apps on the Google Play and the Apple App Store to help protect you from unwanted numbers.

One of such apps that usually makes it to most people’s recommendations is SmartLimits, which is an app that blocks SMSs that other users have reported. This might be an excellent app to try if you continue getting unwarranted and dirty texts from random people.

READ MORE: How To Stop Spam Texts From Different Numbers

READ MORE: What Should You Do If You Receive a Text From Someone You Don’t Know?

Nobody wants their kids to see dirty and unsolicited texts on their devices, but with the increase in these occurrences, it’s starting to seem like you don’t have a choice. Fortunately, you do, and I wrote this article to prove that.