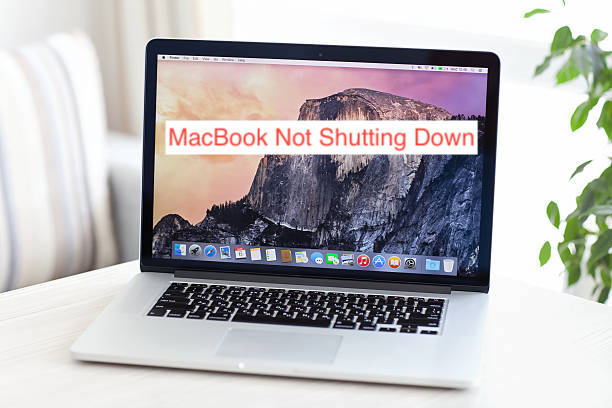 After a long day of working on your MacBook, you instinctively want to shut it down to help the computer cool down and get some rest. However, you can imagine how frustrating it would be if your computer is not shutting down, even after following the regular shutdown routine.

The MacBook not shutting down issue isn’t specific to your scenario; we’ve seen it with many other MacBook users. There are many reasons why you may be facing the issue, but there are usually valid fixes that you can implement to enable your computer to shut down again.

Why is MacBook Not Shutting Down?

If your MacBook is not shutting down, several factors may be blocking the shutdown process. In most cases, finding out what program is the culprit and killing it might be all you need to get your MacBook to turn off.

An example of an instance when an app could be blocking the shutdown process is when you’re exporting a video from a video editing program. Killing the app suddenly to turn off your computer will stop the exporting process, potentially causing you to lose hours of work.

In such cases, you may receive a notification letting you know that an app has blocked the export process. Sometimes, you may not even receive the error message; you just try to turn off your computer, only to discover it’s not working.

Also, you may be trying to shut down your computer the wrong way. There’s a recommended way to turn off your MacBook, and you must be using that option to ensure you’re doing it right. If you still don’t know the correct way, the following section will show you how to shut a MacBook down.

How to Shut Down Your MacBook

Shutting down a MacBook isn’t a lot of work; simply head over to the top left of your screen and click on the Apple logo. From there, you can select the “Shut Down” option. This action should bring up a dialog box asking you to confirm the shutdown. Click on Shut Down again or wait for a minute and your MacBook should turn off.

After following the steps above, you need to wait until all the lights go off before closing the lid of your MacBook. Closing the lid before the computer shuts down completely will only put the laptop to sleep, only to shut it down instantly when next you open it.

If your MacBook is not shutting down after trying everything above, you should know it’s a problem with the computer. In that case, you may want to try out the fixes in the following section to see what you can do about your problematic computer.

How to Fix MacBook Not Shutting Down?

If you’ve tried the recommended option above and your computer still won’t shut down, it’s time to try troubleshooting. As I hinted earlier, a running program is almost always the reason why your MacBook is not shutting down, making it pretty easy to fix. Here are some recommendations for a MacBook not shutting down.

If you have a program running an ongoing task, like a browser downloading a file or a video editing program exporting a file, you may have to close them before shutting down your computer. If you need what the program is working on, consider waiting until it’s done before retrying the shutdown.

Another set of programs that tend to run ongoing tasks on your MacBook is viruses. If you don’t have any programs open, but your computer still won’t shut down, consider running an antivirus scan. In no time, you should find and fix the issues preventing your computer from shutting down.

Should You Shut Down Your MacBook Regularly?

A MacBook not shutting down is a problem, no doubt. The shutdown function is a crucial part of your MacBook’s operations, and when it develops a fault, you should try to solve it. However, should you shut down your MacBook each time you’re done using it?

If you’re using a MacBook from the past few years, you may not have to shut it down regularly. Your MacBook is designed to sleep when you close it, and it will also pick up instantly when you reopen it to get you going almost instantly. Also, the large amounts of RAM that comes included in today’s MacBooks make that easy.

For older versions of the MacBook, however, you may have to shut the computer down every so often to ensure it keeps up its okay performance. When the device opens many apps, the memory gets clogged, requiring you to clear it by restarting your computer.

Either way, you don’t have to shut down your computer every night. An occasional shutdown each time the computer starts to slow down is usually sufficient for your MacBook, and shutting it down every day is just over the top.

READ MORE: Why Is My MacBook Air Making a Fan Noise? Fix

READ MORE: What Are Some Common Mac Issues You May Encounter?

To recap, killing off any programs that are currently not in use might be the magic you’ve been looking for. If they’re not programs you want to kill, you only need to wait until whatever process is preventing the shutdown finishes. As a last resort, you may need to run an antivirus scan.