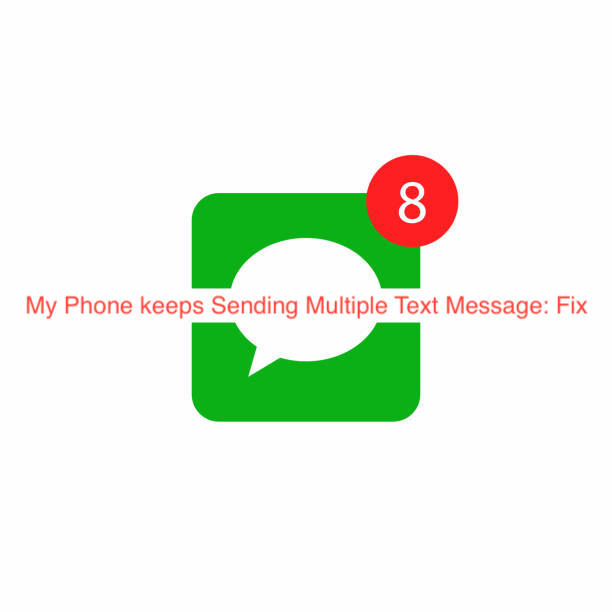 My phone keeps sending multiple text messages, Why? And how do I fix it? In this article am going to be sharing all the causes and how to fix it.

This is usually a carrier or low coverage issue coming from both end, and other times, it could be a software bug, cache files or because of your device hanging.

Why Does My Phone keep sending multiple text messages

There are a lot of reasons your phone may send multiple text messages with same content to a particular receiver.

However, if this glitch or multiple text messages error is happening to just one recipient, then it’s possible the error is from their end.

You can try sending to another contact and see if they don’t complain of the same issue.

However, I have outlined some causes in this article and some solution and / or fixes that has helped many people.

Sometimes this could be because of poor network signal, when there is a poor Carrier issue at a particular time, the intended messages might decide resending it self when the network is good.

This context has nothing to do with actually as it is from the network providers end and it’s unavoidable on your end because you have no control.

Most times your network provider or phone doesn’t even realize that the messages has been duplicated, and sometimes also they might have no control over it.

Ever been when your smart phone is hanging, operating itself or lagging ? This could cause your phone to send same text messages twice or more.

The reason phone keeps sending multiple text messages is when you are using a third party messaging app.

Most of the message apps you download from play store or Appstore may have some bug and corrupt files lurking around, and sometimes may not be compatible with your device.

This could cause your phone to send a duplicate text messages to the same receiver and sometimes even to another receiver.

However, this is not so with built in messaging app, as they tend to work better than any third party app except in some other cases.

How Do I Stop My Phone From Sending Multiple Text Messages

There are ways you could avoid /stop your phone from sending multiple text messages, some of which I have outlined below.

If people keep complaining of receiving multiple text messages from you, it could because of junk files or bug, a simple rebooting of your device could do the trick.

However, this should be when you are sure it’s not a carrier issue or app cache files.

If you stay in a place where there is always a poor signal, you could try using any alternative sim card that has a stronger signal in your locality.

However, for the meantime, you could try moving to another place or maybe climbing a hill top to get a strong signal before sending the intended text messages.

This is because in most cases of duplicate text messages, network server has always been the cause.

If software bugs cause the issue, or corrupt cache files, clearing your app cache files will help fix it.

To clear your cache files, go to your phone settings, tap on “Apps” scroll down and locate messages, click on it and following the drop-down menu tap on “Storage” then click on clear cache.

Disabling or uninstalling your messaging app could clear any software bug, so it is also advisable to do this and probably reinstalling the app again.

If you are using a built in messaging app, this means you can’t uninstall you only get to disable but the reverse is the case with a third party app.

To disable app, go to your message app, click on menu which is usually at the top right corner, scroll down to settings, tap on “Enhance Message” in the following menu that pops up toggle to switch off.

To do this, go to your phone settings, tap on the “General” tab, then click on “Network and Internet” at the top right corner you will see a toggle icon when you click on it, you will see an only available option to “Reset Network, Wi-Fi and Bluetooth”

Click on it to reset your network settings, this would clear any GSM bugs and corrupt files.

Dirt’s on your sim could cause a glitch or crash which might cause your phone to send multiple text messages.

To fix this, kindly remove your sim which is usually at the back your phone beneath your phone battery or at the side of your phone, the location depends on your device.

Once you have removed your sim use a clean silk cloth or some tissues to wipe the sim carefully and then reinstall the sim.

This is most likely to stop your phone from sending multiple text messages, however if you keep encountering this issue, you can try other techniques mentioned in this article.

You should try deleting your current app and installing another, as stated the cause of this could be when your phone is not compatible with the messaging app you are using.

And other times it could be a software bug which doesn’t go down well with your device.

To fix this, try an alternative app and see if it goes really fine. There are many messaging app on play store and Appstore that you can choose from.

In some phone’s, when the battery is low it can cause some pretty crashes or glitch in most apps, sending all messages when you have enough battery to see if it prevents it.

If your phone is low on battery, it might impact the speed of your phone, as well as your phone’s ability to actively track down the best mobile network to use.

READ MORE: How to Schedule Text Messages on iPhone

When your phone keeps sending multiple text messages, you absolutely have nothing to worry about, especially when you have tried all the fixing solutions provided in this article.

In most cases the error is strongly believed to be a poor signal, which you don’t control.

The only solution to poor signal issue is to wait till it is resolved.