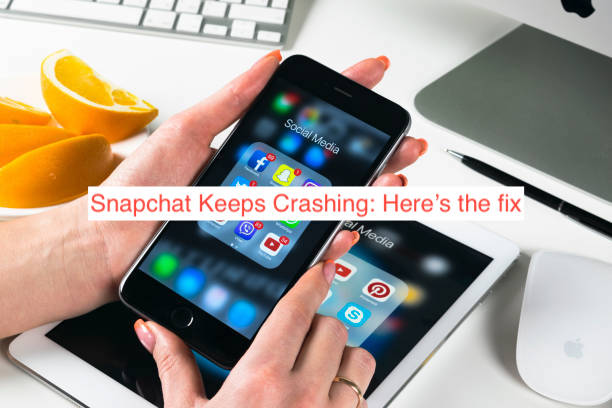 Ever been in a situation where you are trying to open Snapchat but Snapchat keeps crashing, and then you are suddenly getting an unexpected error message thus “unfortunately Snapchat has stopped working” ?

Truth is, there are so many factors that can be linked to this Snapchat crashing error, but in this article, we have provided some possible solutions to this error messages so you don’t have to worry or get frustrated any more.

Snapchat Keeps Crashing: How Do I Fix This?

I know how frustrating this could be because I have been in a similar situation where I wanted to use the app so badly but then it keeps crashing.

Do not worry, just follow the simple steps we will provide you in the following paragraphs to fix Snapchat crashing error message.

If your Snapchat keeps crashing while trying to open it, it could be because of having visited too many apps / files from your device.

You probably didn’t know that when you visit any file from your phone and exit, the file unknowingly continue running in your background.

When this happens, your device might record it as junks, and this could cause glitches on other apps when you attempt to open it.

To fix this and solve Snapchat keeps crashing error, simple minimize your screen and clear all recent apps. Then try opening Snapchat again to see if the error still occurs.

Sometimes when your Snapchat keeps crashing, it could be because of using an outdated version of the app.

Once in a while, Snapchat launches a newer and improved version of their app, and this might cause a glitch on the old version.

So it is advisable to always run an updated version of the app, or install an auto update on the app.

To update Snapchat, login to your play store or Appstore, click on your profile which is usually on the top right corner of your screen.

In the drop-down menu, click on update apps and locate Snapchat in the following options. Then click on it to update.

Sometimes Snapchat keeps crashing when there are too many cache files or corrupt files on the app cache files.

When you are experiencing this issue, clearing your Snapchat cache files might be all there is to it.

To clear Snapchat cache files, go to your phone settings, click on “Apps and Notification” locate Snapchat on the “Other Apps” button, click on it to open locate cache files and delete.

When an app on your phone keeps misbehaving, disabling or force stopping the app could be a simple remedy that it is to it.

To do this, tap on your phone settings, scroll down to “Apps and Notification” click on it and locate Snapchat, tap and see force stop or disable button.

Although in most cases the force stop button may not be accessible, you only get the uninstall button.This is because the app isn’t a built in app on the device.

Apps crashing sometimes might be because of a system upgrade or bugs on an app.

When your system has been updated to the latest upgrade version, it is advisable to also update all your apps as most of the apps might not be compatible with your device anymore.

uninstalling Snapchat will clear all software bug and corrupt files in the recent app, then reinstalling a clean one from play store or Appstore.

Rebooting your phone solves any technical issues on your device, it doesn’t only clear junks and bug it enhances a smooth running of any app or file on your device.

This wouldn’t take much of your time, it just for some seconds and surprising it enhances your device performance and solve any issue that could cause Snapchat to crash.

When Apps are downloaded outside play store, Aptoid , Apkure or other developers tool , the app could be somewhat harmful to your device.

This is because these developers tool takes time to review and make sure that apps wouldn’t endanger users device before approving it to be installed.

But when you install apps outside these tools, it can cause harm to other apps on your phone and sometimes to your phone even.

When there are Malicious or corrupt o Apps on your phone, it could cause other legit Apps to keep crashing. Make sure to always download apps only on legit developers tool.

However, the cause of Snapchat crashing might not really be from your end.

Especially if you have tested all the provided solutions in this article. I know it’s kinda frustrating but Don’t be. It could because of server break down.

If your Snapchat keeps crashing, use another device which has Snapchat installed and check if the issue is only from your end. This is to make sure the problem is not server related.

You can check the Snapchat support page @Snapchatsupport on their Twitter page, if the issue you are experiencing is a server error, they may have tweeted it on their support page.

You can also check if the server is down using “DownDetector” if there is any app down, it will show on the page.

If the issue is reported to be coming from the side of Snapchat, probably a server break down, then there is no cause for alarm. You just have to wait till the issue is resolved.

READ MORE: Why Is My Snapchat Not Installing? Here’s the fix

Snapchat keeps crashing generally might be because of server bug, server downtime, and corrupt files lurking around your device.

The above solutions we have provided in this article will definitely do the magic. As long as you follow the Step-by-step guide.

Although in rare cases where you have tried all the above fixes, and Snapchat keeps crashing then we advice you contact the developers on Twitter.

Visit their Twitter page @Snapchatsupport explain the ordeal you are experiencing to them, they will give you some possible causes and advice you on how to fix it.

We are glad you followed this post to the end. Hope it was helpful? If you have anything to say we are waiting at the comment box.