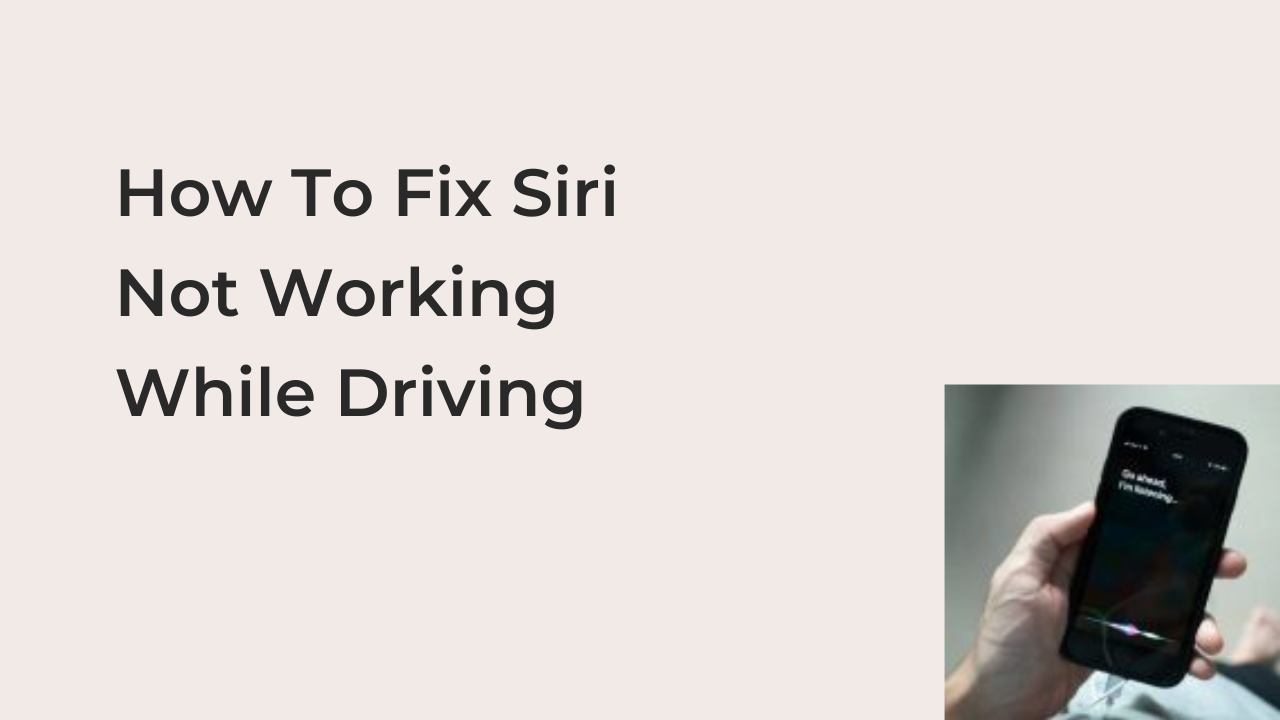 Apple Siri is a voice automated human assistant. The software is an inbuilt application program on various iOS devices. It’s continually undergoing effective upgrades and improvements to meet the needs of its users. Siri is only limited to Apple users, and it’s one reason many people use Apple products today.

In this article, you’ll learn how to fix Siri not working while driving. The below fixes are the proven methods that will help you get rid of all the issues you are having with your Siri on your iOS device.

People all over the world often use Siri while driving their cars as it makes driving more comfortable. Siri can simply be automated by saying “Hey Siri” and it will then follow your voice command prompt.

Troubleshoot and fix “Siri Not Working While Driving”

Here’s what to do if Siri stops working or if you’re not getting verbal feedback from Siri while driving, first ensure that Siri is switched on.

1. Some people complain about Siri not working. Meanwhile, Siri might be switched off. Maybe you might have accidentally muted your device or you’ve switched off the “voice feedback command” prompt. What you need to do is to launch your voice feedback settings.

How do I make Siri work while driving?

2. You need to check if Siri language is the same as your spoken language, for example, if you are speaking Spanish and they set your Siri to interact or understand English.

Fix: Simply launch your settings, locate the general menu and click on Siri then click on language. You can then add any language of your choice.

3. Did you activate low-power mode? Low-power mode usually limits the core functions of your smartphone. This explains why Siri might not be responding.

Fix: Click on settings, then locate the battery option, click on it and then deactivate low-power mode. This should fix Siri not working while driving.

Fix: You may get a small brush and use it to clean the microphone, as there may be dust blocking the transfer of data from your mouth to your phone. If trouble persists, kindly visit any apple store nearest to you.

Fix: Ensure they connected you to the internet and consider switching to mobile networks if you are on Wi-Fi.

6. Is your iPhone up to date? One way to enjoy the best experience with iPhones is by not overlooking update notifications whenever you have one. I usually load updates with a long-lasting solution to fix bugs that might alter the performance of your iOS device.

Fix: if you have ignored some important updates in the past, update your iPhone by yourself by simply launching your settings program, locate general. Now look for where it says ‘software update,’ then click on “install now”. This should fix Siri not working while driving.

Fix: To fix this, you simply have to use the simplest forms of words or by speaking slowly so Siri can pick up your speech command.

8. You should your iOS device as it may help correct the issue you are facing with Siri not responding. Most times, a simple restart of your device addresses some petty issues that are affecting the overall welfare of your phone.

Proven Solutions To Curb Siri Not Working While Driving

Learn how to fix Siri not working while driving iOS 15

If you are finding it hard to get Siri to work while driving, consider switching from a wireless connection (Bluetooth) to a wired connection. We can achieve this by simply using the iPhone cable to connect your iOS device with your car.

READ MORE: How To Make Siri Say Something When Charging

There’s a 95% chance that you will be able to profound a suitable solution to Siri not working on your device from the quick fixes highlighted above. Should, in case none of the above work for you, simply locate an Apple store nearest to you today! And get your device fixed by a qualified technician who will examine your iOS device and be able to pinpoint while Siri is not working.