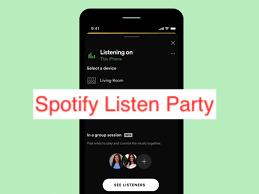 There’s a pretty good chance that you enjoy the same set of music as your closest friends. While you may share Spotify playlists and songs, why not take it a step further by listening to the same songs in a group session?

And no, you don’t need to buy a loudspeaker, lock yourselves in the same room, and blast music through the speaker all day. While that’s certainly an effective way to host a listening session for your favorite songs, it may be rowdier than you’d want, and that’s not how Spotify group sessions work.

At this point, you should already have the idea that the group session on Spotify must be a great idea. In this article, I’ll show you how Spotify group sessions work and how you can host a Spotify Listen Party for yourself and your friends. Also, you’ll learn some alternatives as a bonus.

What Is Spotify Listen Party?

For a start, it’s crucial to note that there’s no such thing as a “Spotify Listen Party,” at least not officially. When people refer to that, what they usually mean is the Spotify Group Session, a feature that Spotify launched in 2020, growing to become one of the company’s most successful ventures in recent years.

Group Session is a Spotify feature that lets users listen to their favorite playlists with their friends or family in real-time, regardless of distance. With shared media controls, you can be sure that everyone at the party is listening to the same thing as you.

When you start a group session with Spotify, you can share a “Join” link to members of the session to enable them to join the party and share in the fun. A group session comprises at least two people, with an upper limit of seven Spotify users, which we hope is going to increase.

During a Spotify Group Session, everyone in the party will have access to the media controls, making it possible for anyone to skip, play, or pause the music playing at the moment. You can also add tracks to the playlist you’re listening to during a Group Session, as long as you’re part of the party.

Before trying to Spotify Group Session at all, you may want to ensure you have a premium subscription, as the feature is locked to premium users only. Also, the feature has been in beta since launch, and now, thanks to the occasional bugs that still ravage the app, is still in beta. So, you shouldn’t expect the smoothest experience when hosting or joining group sessions on Spotify.

How to Start a Spotify Listening Party

With what I’ve explained above, you should already have an idea of how interesting the average group session will be, and I kid you not, it’s a lot of fun. The only way to accurately determine how interesting a listening party can be on Spotify is to host or join one.

It doesn’t matter if you’re hosting or joining an existing Group Session, everyone in the party will have access to the media controls, so it’s the same experience for all. With that said, here are the steps required to start or join a Group Session on Spotify.

I think I’ve mentioned it enough times that you’ll need to be subscribed to the premium version of Spotify to be able to access the loved Group Session feature. Given how many people adopted it even in beta, I bet you already have a premium Spotify subscription.

On an Android smartphone, you can easily subscribe through the official Spotify app, but the same luxury isn’t afforded to iPhone users. No thanks to a dispute between Spotify and Apple, you’ll have to head over to the Spotify website on a desktop browser to get a subscription to use on your iPhone, iPad, or iPod.

Also, you want to ensure you’re listening to Spotify from a mobile device. For some yet-to-be-explained reasons, Spotify hasn’t brought the feature over to the desktop version of the music streaming service; but hey, it’s still in beta.

Once you have a subscription to Spotify premium and the latest version of the app for either iOS or Android, you can always access the feature. Of course, you’ll need to start playing a song to access the feature since it works by creating a group listening session, otherwise called a listening party.

For the best experience and to make the most out of the Group Session feature, you may want to play a podcast with multiple episodes or a song that’s part of a playlist. That way, the session won’t end as soon as the song or podcast has stopped playing.

You can start a group session with the connect button that’s typically for connecting to your computer and other devices. Simply tap on the button and scroll through every option until you arrive at the “Start a Group Session” option. From there, tap “Start Session,” to start a Spotify listen party.

Spotify should instantly start a joinable group session with the playlist you’re currently playing. To add new participants, click the “Invite Friends” option and choose one of the numerous ways to invite a new friend to the party.

It’s crucial to note that you can’t chat within Spotify while a Group Session is ongoing. Since similar features require you to converse, you may use a third-party app like WhatsApp or iMessage for that purpose.

READ MORE: How To Use Spotify Listen Together

One reason we still stick around Spotify is the unneeded but fun features they keep adding to the app. One of those features is Group Session, which has made it considerably easier to start and join a Spotify listen party.

If you’re unsure about how to use the Group Session feature, this article should offer lots of insight. Here, I’ve shown you how the feature works and how you can start and end a group session.