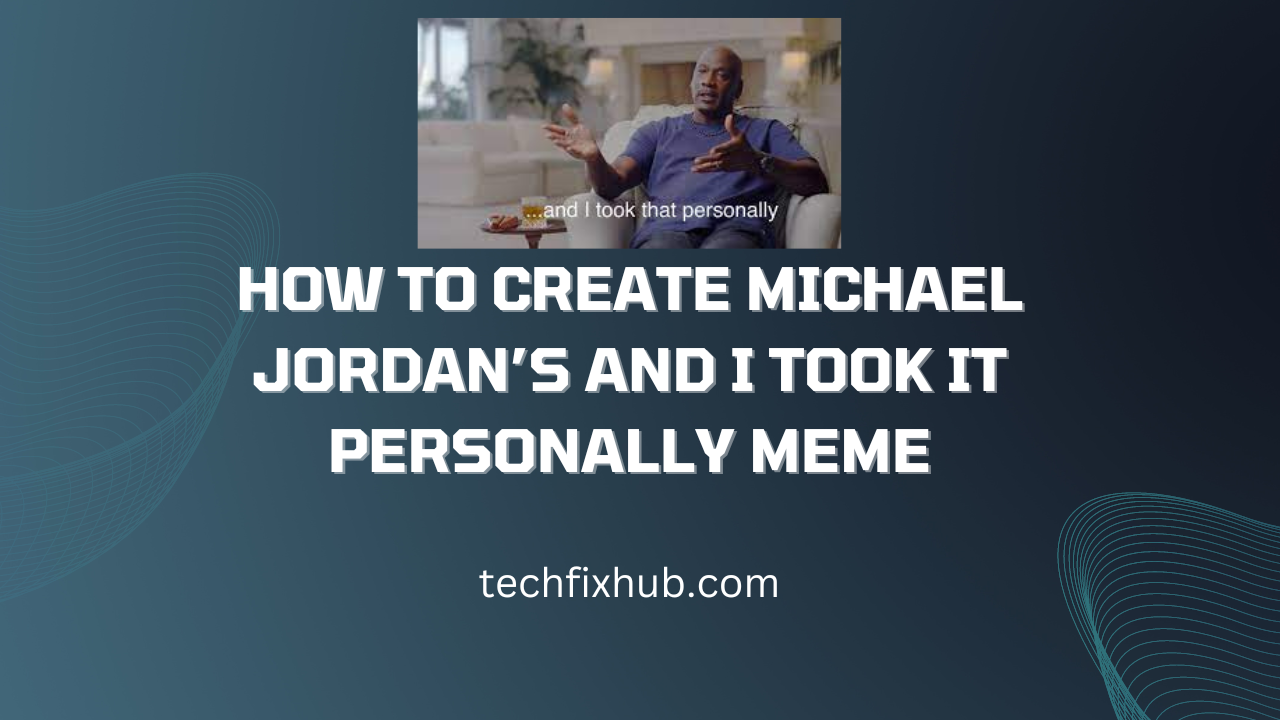 Memes have grown to become a lot more popular than we thought they would, and today, we’re writing meme explainers for popular memes. It’s not unbelievable that Michael Jordan’s image would be shared millions of times on the internet, but nobody expected it would be as a joke unrelated to basketball.

From the crying Jordan meme that broke the internet months ago, we’re back to the “and I took that personally meme.” If you’ve seen this meme a little too often, you may want to know how it originated and what it means.

With Michael Jordan’s personal popularity, this meme quickly spreads on the Internet. It
leads to many specific products in the market actually, such as custom stickers of And I
Took It Personally. We may apply these stickers on different occasions, such as
Events or game spots. By using these popular elements, the participants will be more
active. And they can also play a better promotional effect.

In this article, you’ll learn about the origin of this meme, what Michael Jordan took personally, and if that was ever a thing in the first place. Also, you’ll learn how to customize a meme using this template for the laughs.

What Does “Michael Jordan And I Took That Personally” Mean?

If you’re not a native English speaker, you’ll struggle to find the logic behind this statement. However, the statement is very commonly used in the English language, explaining why it’s being used for memes continuously.

Taking something personal simply means when someone takes a general statement, remark, or action as a personal insult to them, usually causing them to respond aggressively. If you can mentally replay all the “and I took that personally memes you’ve seen, you’ll notice that they all follow this same pattern.

For instance, the meme was about rubbing your cat’s belly and the cat taking it personally. If you’ve ever owned a cat, you should know how many claws marks the creator of that meme has by now.

Understanding what this statement means is key to creating memes that fit the narrative of the caption. Now that you know what the statement means, it’s time to dive into the origin of the meme, and if possible, show you some of the best ways to create similar memes.

Where Does the “And I Took That Personally Meme” Originate?

If you’re more concerned with how this meme came into being, I got you. Just like most other memes, Michael Jordan was innocently having a great time in The Last Dance documentary, oblivious of the fact that a scene in the documentary will eventually become insanely popular than the entire clip.

The Last Dance was a documentary of ten parts that accounted for the 1990s experiences of the Chicago Bulls. Since Michael Jordan was the best basketball athlete of that generation and led The Bulls through the run, it’s not very surprising that he’s also the dominant figure in this documentary.

While The Last Dance didn’t do badly in terms of popularity, its greatest win wasn’t the number of streams it had on Netflix. To be more specific, the memes that the docuseries ended up creating became even more popular, reaching millions of people, including you.

While many memes were created from the series, the most popular one was that of him looking like he took a specific action personally. And true to his actions, he regularly confessed to taking a lot of things personally at some point in the show, especially when showing his exasperation with the Detroit Pistons.

The meme started to garner some popularity in 2020, and by 2021, it’s one of the most popular memes on Twitter. You most likely saw that meme on Twitter and searched Google to see its origin and how it quickly garnered popularity within a short time.

Within a short period, the meme has moved from a Twitter section to a Reddit sensation. By the beginning of 2022, it has become an internet sensation, taking every internet forum and social media site by storm.

How to Create the “And I Took That Personally” Meme

Most people don’t care about the rationale of a meme or how it originates. Instead, all they care about is how to contribute to the fun, which can only be possible by creating a meme using the trending template. In the case of this meme specifically, how do you create a meme using the template?

Here are some of the best ways to create a meme with the “and I took that personally” to contribute something to the growing internet sensation.

If you’re looking to create a meme with no prior knowledge of image manipulation programs like Photoshop, you may want to use a ready-made meme creator like Imgflip. This platform already has all the templates, and you only need to enter the caption and submit it.

Imgflip also has a community section that lets you put out your meme to the world to see how good of a memer you are. Depending on how popular your meme eventually gets, you stand a chance to get featured on the homepage, which is the peak of success for an Imgflip contributor.

Simply searching “and I took it personally meme Imgflip” on Google should bring up the template on the website. Click on the appropriate page and you can start changing the meme to your heart’s content.

If you’re looking to make a meme and browse other people’s memes for free, Imgflip is your best bet, but Kapwing does it better at a price. You can always create breathtaking memes from the simple caption using either platform.

READ MORE: How to Make a Meme on iPhone

Many memes have made it to the internet, but only a few are great enough to become real internet sensations. Fortunately, Michael Jordan’s gesture in The Last Dance was one of these great memes, and it blew up fast.

In this article, I explained what it means to take something personally and why the meme was an accurate depiction of that. You also learned how to create similar memes to help contribute to the world of memes with your unimaginable creativity.