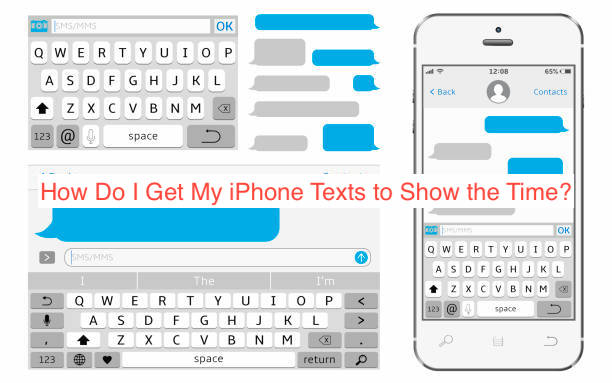 If you’re moving from a messaging app like WhatsApp to iMessage, you’ll notice that a lot of things are different. One of the biggest differences most users struggle to adjust to is timestamps on text messages; it’s just weird on iPhones.

When you send or receive a message on WhatsApp, for example, it comes with a timestamp that lets you know exactly when the message was sent or received. In the case of iMessage, however, that doesn’t seem to be the case. Don’t get me wrong: there is a timestamp, it just isn’t stuck to the text.

In this article, I’ll answer the question: how do I get my iPhone texts to show the time? It’s a very simple gesture that works on messages you send or receive, and will forever reshape how you use iMessage.

Can You Get Your iPhone Texts to Show the Time?

There’s nothing more frustrating than trying to perform an impossible action. That’s what you do when you don’t ask if something is possible before trying to jump into doing it. With that said, is it possible to get your iPhone texts to show the time?

Fortunately, texts on iMessage are sent with a timestamp that’s typically invisible. However, the point is that the timestamp exists and there’s a way to reveal the time behind it. Long story short, it’s possible to get your iPhone texts to show the time when you sent it, or rather when it was sent to you.

I prefer the approach of iMessage to that of something like WhatsApp. The fact that it doesn’t throw the timestamp to your face makes the messages cleaner and reinforces them as the subject. WhatsApp’s look doesn’t have a too friendly vibe to it, partly because of the nerdy timestamps.

The ability to show the hidden time using a quick gesture gives you the best of both worlds. In the following section, you’ll learn the gesture that will help you get your iPhone texts to show the time.

How Do I Get My iPhone Texts to Show the Time?

At this point, you already know that you can see timestamps on texts sent from your iPhone, but how can you do that exactly? How do you get texts on your iPhone to show you the time?

The gesture for showing the timestamp on your iPhone texts will work, even if the texts themselves aren’t iMessage texts. For the uninitiated, messages you send to people using Android phones are routed over the SMS protocol, which is the reason for the green bubbles; and yes, this gesture works for getting green bubble messages to show the time.

Something else you should probably know is that you only see the timestamp for as long as you can keep your finger on the screen. Once you release the messages, all the dates and times on them will disappear, and you can make them reappear again by swiping to the left; it’s that simple!

Why is there No Timestamp on My iPhone Messages?

Coming from an app like WhatsApp or Telegram, you’ll naturally expect iMessage to have timestamps on every message you send or receive on your iPhone’s Messages app. As this article has demonstrated earlier, the absence of a visible timestamp on your iPhone’s messages doesn’t mean they do not exist.

If you have to see the time you sent a message to someone on the app, you can swipe left on the message and there you go. You can always make this gesture each time you intend to see the timestamp on your iPhone’s messages, and releasing the texts will revert them to their previous state, timestamp-less.

Can I See When Someone Reacted To an iMessage?

Another oft-requested function is seeing when someone reacted to a text sent over iMessage. In case you didn’t know, iMessage lets you send reactions to a message, and those reactions will appear on the other end. However, they don’t appear as individual messages, unlike regular text messages.

When you swipe to the left on all your messages, you’ll notice that you don’t get timestamps on reactions. That’s not a bug; there’s still no way to see when someone reacted to an iMessage at the moment. If you’re conversing with an Android smartphone user, there might be a workaround, but you don’t even want to hear about it, given how convoluted it sounds.

Can You Go to a Date on iMessage?

Since iMessage lets you see timestamps, you should be able to jump to messages from a specific date, right? Well, at the moment, it seems like you still can’t, at least, not from the Messages app that ships with your iPhone.

Apple still doesn’t let you choose to jump to messages from a specific date on iMessage. Given how much people ask for this, I wouldn’t be surprised if the feature ships with the next iOS update. At the moment, however, the best we can do is to keep our fingers crossed.

READ MORE: How to Unarchive Text Messages on iPhone

READ MORE: How to Search Text Messages on iPhone

If you want your iPhone’s Messages to show the time on texts, you don’t have to keep jumping through your Settings app. You can simply swipe left on any message to see the timestamps on every message you sent for that day. If you have any questions on this topic, I can assure you this article must’ve taken care of it.