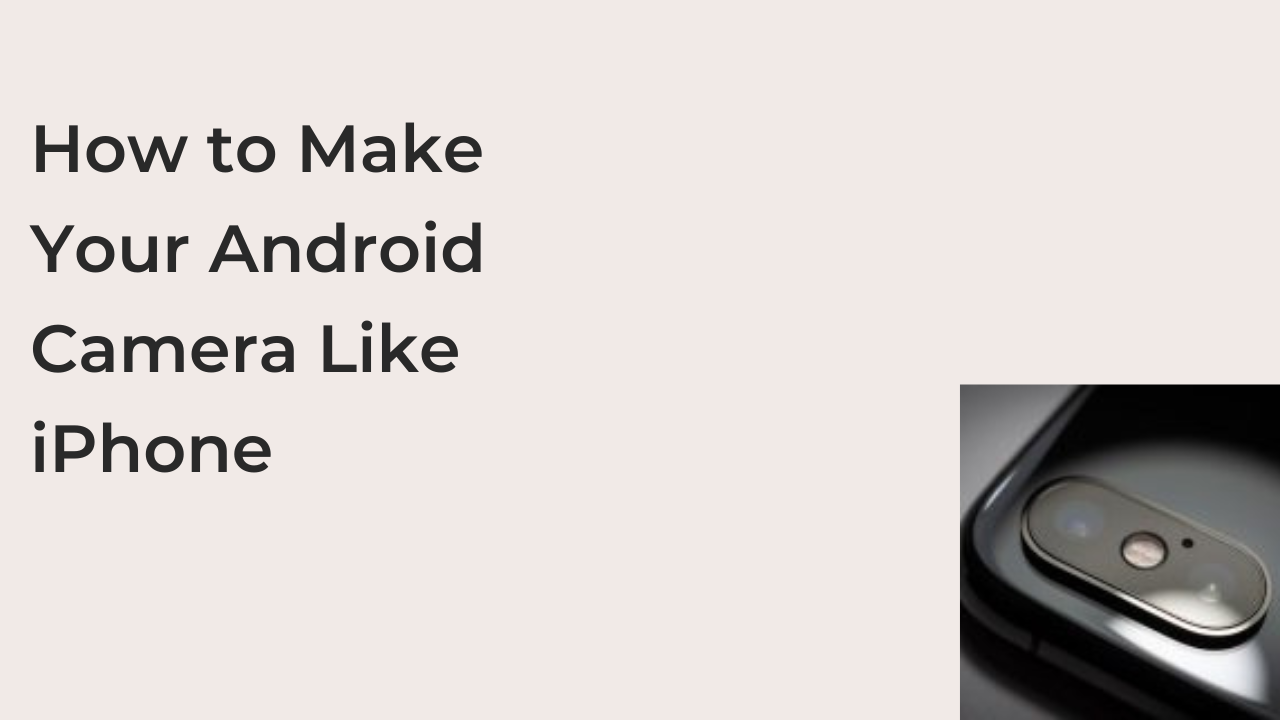 In this article, you’ll learn how to make your Android camera like iPhone. It would enable you to replicate the camera experience of an iPhone. If you so wish, I’ll also show you how to have an iPhone-like interface all around, making it look like you’re using an expensive iPhone.

iPhones are good and Androids are great, but one thing is clear: the average iPhone is better than the average Android and equally more expensive. It’s no surprise, however, that most people want to replicate the look and feel of iPhones and expensive Androids.

In this instance, it’s trying to replicate the look of the iPhone’s camera. While you can do that to a certain, there’s still only so much you can do without paying for a new iPhone.

Can You Make Your Android Camera Like an iPhone’s?

There’s a limit to what you can replicate without buying an iPhone. While it’s pretty easy to get the iPhone camera interface, replicating the image quality that comes out of an iPhone will be pretty impossible unless you’re willing to do some manipulation in Photoshop.

Since it’s already clear that you may not be able to get the distinct quality of iPhone photos on your Android device, here are some tips to make your Android phone look more like an iPhone without having to buy an actual iPhone.

The first step to making your camera experience feel like that of an iPhone is charging your phone’s look and feel to that of an iPhone. If you’ve previously dabbled with launchers on your Android phone, you should understand that the process of getting the iPhone-like look isn’t complicated.

For launcher novices, a launcher is an app that determines how your phone’s interface will look like. Your phone’s out-of-the-box interface is the launcher that the manufacturer preloaded. If you’re using an Android phone, you have the luxury of changing your launcher as you see fit.

If you want an iPhone-like look for your Android camera, you can start by changing the icon. All mainstream iPhone launchers will change your phone’s camera icon to an iPhone’s by default. All you need to do is install the launcher from Google Play.

While a launcher won’t give you the ability to use iOS apps from your Android smartphone, it will change your icons to make them look like that of an iPhone. If your phone has a camera icon, you’ll magically see it change to an iPhone camera icon.

The main point of trying to make your Android camera like that of an iPhone is to mimic the iPhone. If you’ll be doing this, you want to do it in a very clear way.

One of the clearest ways to mimic an iOS interface is by making all your apps look iOS-like. Fortunately, there are many Android apps, some on the Playstore that will let you mimic the interface of iOS apps.

Here are some of the best apps that you can install on your Android phone to make it look just like an iPhone.

One of the major iOS features that most Android users envy is the Control center. With a single swipe from specific corners of the screen, you’ll have intuitive options to enable and disable Wi-Fi, Bluetooth, and adjust your device’s brightness.

Unlike on iPhone, you can choose how you want to pull up the Control Center on your phone. While the top right corner is the most preferred option, you can select to swipe up to reveal the control center, making Android’s solution arguably more functional.

The catch, however, is that not all the control center features will work. One that will almost certainly not work is the screen recording feature, which is natively nonexistent on most Android phones.

Judging by the name, you already know what this app is set out to achieve. If it’s not too obvious already, it’s a music player designed to look like Apple’s default Music app on iPhone, instead of using Google’s material design language.

The catch is that you don’t get to stream music using this app. Since they don’t have the licenses required to host any music, you have to download songs from sources across the web before listening to them on the music app.

Also, there’s no assurance that this app will be on Google Play whenever you want to download it. Apple isn’t very friendly with people trying to copy its apps, and it only takes a copyright strike for Apple to bring it down.

However, the app will always be available for download on the developer’s website. If you’re comfortable with sideloading Android apps, you shouldn’t be bothered if the app gets banned from Google Play.

If you’ve installed a launcher, you should already know that it only works after you’ve unlocked your phone. Your lock screen will look the same, throwing off the balance of having a perfectly iPhone-like device.

The iOS Lock Screen app will correct this. When you use it in conjunction with an iOS launcher, you’ll get a device that looks and feels like an iPhone.

How To Make Android Camera Like iPhone On TikTok

Unfortunately, they are no trick to make your android camera look like iPhone on TikTok unless you want to set it on your normal camera. The best thing you should do is to get an android phone with a good camera and use the TikTok filters and templates to create awesome videos.

They are many apps online that claim to give you all the iPhone camera filters, but it is not possible. Below are some of the recommended iPhone camera apps to use on your Android phone.

You can make your Android phone’s camera look like that of an iPhone, thanks to the many customization options available on Android. You can even go as far as mimicking the lock screen, music app, and the famed control center.

But while you can copy the look of the iPhone’s camera, you can’t copy the camera quality. Unless you use a pretty expensive Android device, getting an iPhone may be a worthwhile investment.