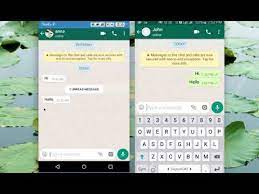 If you want to avoid leaving your friends on read, I can help. This article will show you how to read a text without opening it on Android smartphone.

Depending on what messaging app you’re using on your Android smartphone, a sender will be notified as soon as you read a message. While some apps like WhatsApp lets you disable this feature to some extent, others like Snapchat don’t make this possible.

However, you may be too busy to reply to a message, but not too busy to read it.  As someone who has a lot of friends, I know how it feels to be left on read.

How to See If Someone Read Your Text on Android

It was previously impossible to determine if someone read your text on an Android smartphone. If you had an iPhone, you’ll always see read receipts for iMessages sent to fellow iPhone users.

Firstly, you must ensure that both you and the recipient are using Android phones that support the RCS messaging protocol. Then, you must confirm that you’re both connected to the internet when you sent the message, as the message will go through the SMS protocol if you weren’t.

If both of these conditions were met, you can check if someone read your text by enabling “Send read receipts” in the Messages app settings. You can also enable “Show typing indicators” to know whenever the other person is typing.

If you’ve enabled read receipts, you’ll always see a “Read” below every message that the recipient has opened. However, there’s a little problem with enabling read receipts and typing indicators on Android.

Your recipient also has the option to determine whenever you’ve read a message. If you don’t want the sender to know you’ve seen a message, turning off chat features mightn’t be the best idea.

The next section will show you some of the most creative ways to read a text without sending the “Read” notification to the sender.

READ MORE: How To Stop Someone From Tracking Your Text Messages

How to Read a Text without Opening It on Android

As hinted in the section above, Google will always let the sender know when you’ve read a message on your Android, as long as you’ve enabled RCS. While this isn’t always a bad thing, it’s not always what you want.

If your smartphone runs Android 7.0 Nougat or later, you can read your texts without having to open them in the Messages app. You can even reply to the message without sending a read receipt using the reply button beneath the message in your notifications.

When you receive a message from the sender in question, it will usually contain the sender’s name and an abridged version of the message. Swipe down slightly on the notifications and it will expand to show the full message.

However, if the sender sent multiple messages, you may have to open the app to see all the messages. If you can keep track of him sending them, however, you can check each message individually before they pile up to become impossible to check.

While this isn’t a way to read your SMS without opening it, it achieves the same objective as not opening it will. If you decided not to open a message before reading, it’s either because you’re checking someone else’s messages or you’re unwilling to send read receipts.

If it’s the latter, this option works perfectly. Messages can only tell if you’ve read a message when you have a working internet connection. If you can get rid of the internet by using airplane mode, you can wait for as long as you want before sending a read receipt.

A more effective way to achieve the same objective is by turning off chat features on your smartphone. That way, all of your messages will use the SMS protocol, sending potato-quality photos and videos as usual.

While Messages is the native messaging app for Android, most Android users use alternative instant messaging apps on their phones. If you’re a fan of WhatsApp, Telegram, or Snapchat, you may want to know how to read a text without opening on these apps.

For WhatsApp, which is the most popular instant messaging platform, you can also read messages from your notifications drawer. Like Messages, you can also reply to messages without reading them, giving you unmatchable stealth.

For platforms like Snapchat, however, it’s not so easy. The best way to read a text on an instant messaging app like Snapchat without being noticed is by clearing the cache after.

To do this perfectly, you must ensure that the text has loaded and is ready to read. Then, you’ll enable airplane mode, which makes it impossible for the app to determine if you’ve seen a message.

After checking the message, you’ll go to your Android settings to clear the app’s data and cache to prevent it from updating the read status when you come online. After concluding the process, it should look like you’ve never opened the text.

This strategy works perfectly for Snapchat and Messenger, but you can try it with other instant messaging apps to see how it works out.

READ MORE: How to know if someone blocked you on iMessage without texting them

READ MORE: How To Read WhatsApp Messages Without Opening The Chat

READ MORE: How To Read A Deleted WhatsApp Message Someone Sent You On iPhone

Instant messaging apps are always nosey, trying to notify the next person about what you’re doing in real-time. If you’re not comfortable with someone else knowing when you’ve seen a message, there are some ways to keep it hidden.

In this article, I’ve explained how to read a text without opening it on Android, both on the native Messages and also for third-party instant messaging apps.