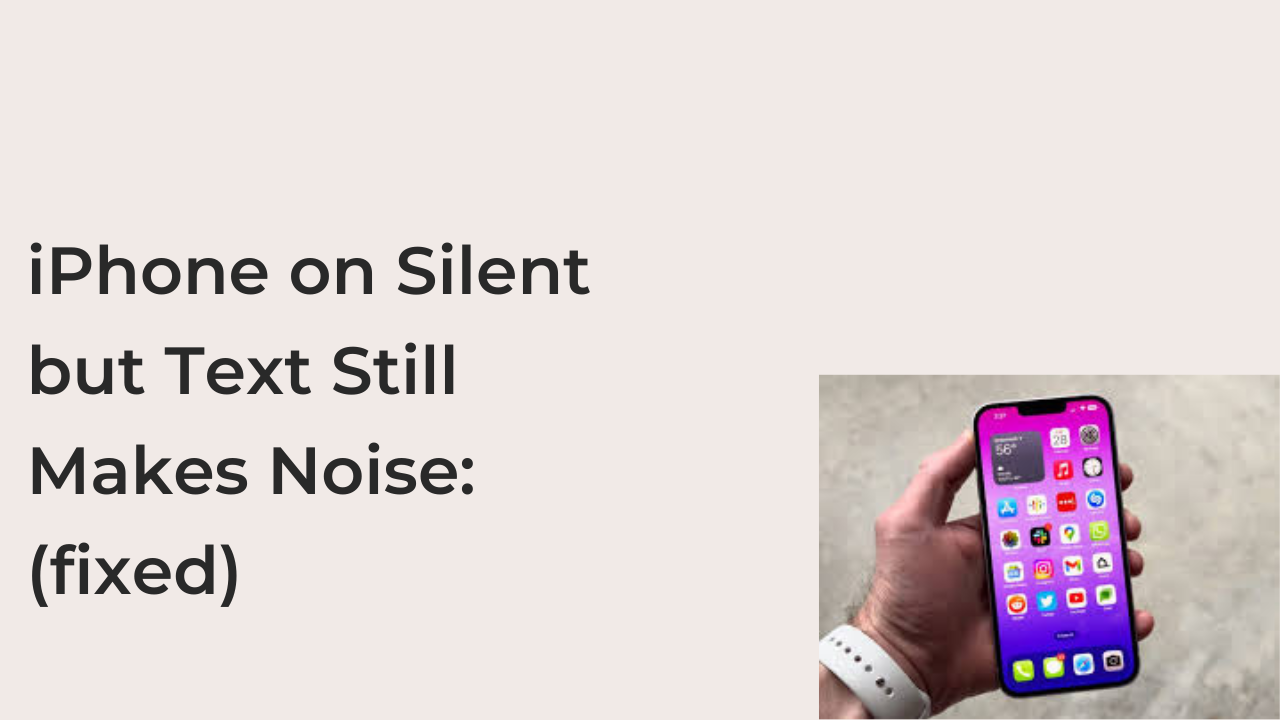 It’s pretty difficult to get a completely silent iPhone. If your camera shutter sound isn’t interrupting your Do Not Disturb order, calls from your favorite contacts will find ways to break through the restrictions. However, why does iMessage seem to make noise, even after putting your iPhone on Silent?

To understand why this behavior happens occasionally, it’s important to note that Do Not Disturb does not affect your favorite contacts. If you set some contacts as favorites, you’ll also get a notification sound whenever they send a text message.

In this article, you’ll learn some of the best ways to ensure that your iMessage notifications don’t make sounds, regardless of the person texting. You’ll also learn why some messages always seem to defy all odds to make a sound, even when you have Do Not Disturb enabled.

How to Fix Text Making Nose on Silent iPhone

If this hasn’t happened to you, it will be pretty difficult to understand how frustrating it can be. However, it happens that most times that this happens, you usually caused the problem unintentionally.

If you want a phone with introverted tendencies, here are some fixes to try to ensure that it doesn’t ring out for any iMessage text whatsoever.

It doesn’t matter how smart you think your iPhone is, it remains a little device with millions of lines of codes in its memory. When you do too many things with the phone at the same time, the codes may overlap and cause problems, causing minor issues.

Typically, a restart should fix these sorts of problems. You can easily restart any iPhone by turning it off and on again. Here are the ways to restart different models of iPhones as it’s not universal across all devices.

If you’re using an iPhone X or a newer version of Apple’s flagship device, the steps to restarting your iPhone will be largely the same. You only need to press the side button on your iPhone, as well as any of the volume buttons until the power slider appears.

Unlike on Android, there is no way to let your device turn itself back on. When you drag the slider to the right, you’re powering off your iPhone. You can press and hold the side button again to turn on your device, completing the restart.

If you use an older device, the steps above won’t work for you. While these phones can run the latest version of Apple’s operating system for mobile phones, they still function quite differently in some aspects, with their restart behavior being one of those.

To restart any of the phones mentioned above, you only need to press the power button at the side of your iPhone until the power slider appears. Drag the slider to the right, as usual, to turn off the iPhone. You can turn on the iPhone afterward using the power button to complete the restart.

If you have an even older iPhone, the steps to restarting it will be the same. However, the power button will be at the top of the iPhone, instead of being at the side like with the iPhone 8 and others.

Sometimes, turning on Do Not Disturb doesn’t do exactly what you want. There are many ways for apps to get around Do Not Disturb, and your volume-down buttons don’t work consistently.

The only consistent way to silence your iPhone is by using the mute switch on the side. The mute switch, also known as the Ring/Silent switch, has existed on every iPhone since the original iPhone. It’s one of the most convenient ways to silence any smartphone without thinking.

It’s pretty simple to know when you’ve muted your iPhone using the Ring/Silent switch. Just take a look at the side of your iPhone and you’ll see a little orange light if the device is muted. If the orange light doesn’t exist, flip the switch to the opposite direction to silence your ringer.

While iPhones may be far less buggy than Android phones, they aren’t immune to bugs. We’ve continuously seen instances where people experience the widespread issue of their iPhones ringing, even after they’ve muted it manually using the ringer.

When this kind of problem occurs, Apple usually pushes a fix to mitigate the problem. You can install the fix on the next iOS release, which happens very frequently.

If enough people report an issue with their phone ringing after being silenced, Apple will quickly issue a fix and roll it out to affected users. You can check the updates section in your settings to check and install any pending updates.

Even if you’ve enabled all the variants of silent mode on iPhone, calls, and texts from your favorite contacts will still make sounds. This happens due to a feature called Emergency Bypass, which allows very high-priority notifications to go through, regardless of your device’s silent status.

If you notice that your iPhone only rings for texts from certain contacts, you should consider disabling emergency bypass from those contacts to stop this behavior. Alternatively, you can consider deleting all the contacts in your favorites list for the same effect.

READ MORE: How to remove iPhone Shutter Sound without Jailbreak

When you turn on Do Not Disturb, you usually want no disturbances whatsoever. But your iPhone doesn’t always do what you want. In some cases, incoming texts will still make noise, even if your iPhone is on silent mode.

You can stop this behavior when you know the cause. If it’s a random bug, you can restart your iPhone. Widespread bugs may require you to update your iOS version. Before concluding it’s even a bug at all, it’s crucial to check if the contacts sending those texts aren’t in your favorites list.